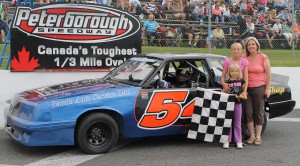 At the start of the year, every driver at every track has a shot at earning a season’s title in their respective division. It’s what they’re able to do between the first green flag and the final checkered that will determine their fate.

Heading into the 2014 campaign at Peterborough Speedway, Benedict Racing faced a set-up notebook with nothing but blank pages. After running nothing but front-wheel drive machines during their previous seasons at Kawartha Speedway and Peterborough, this would be their first in a rear-wheel drive ride and early season runs showed the equipment to be as different as day and night. Team owner, crew chief and father Doug Benedict admits that there were some early season struggles.

“I’d be lying if I said we weren’t a little concerned with the way the year started off.” confided Benedict. “Looking back on things now, it was more a case of new car blues than anything else, but that can still leave you wondering if you’ve made the right choice. There were a couple of nights we loaded-up early because of mechanical gremlins and that’s something no team ever wants to do.”

While weekly short track racing is next to impossible to predict, no one could blame Danny Benedict for being proud of his most recent success. In 2 weeks of racing against a highly competitive field, he has scored wins in 3 of 4 qualifying events and logged a 4th place finish in the Saturday, July 12th Mini Stock feature. The young speedster – who will head for Algonquin College in Ottawa this September – says he can’t wait to get back in the racecar.

“The car was a rocket ship out there,” said Danny Benedict. “It’s so much fun to drive a car that is fast and handles that well. I could work through traffic on the top or bottom of the racetrack and the changes we tried throughout the night made it even better. I can’t remember a time when everything just came together exactly as we’d planned.”

Benedict will have to wait until Saturday, August 2nd before the Mini Stock division is back in action at Peterborough Speedway. That night, they’ll run double features (to make-up for the July 19th rainout) in conjunction with the Touring Chase for the Colours Pole qualifying event that will also include the OSCAAR Outlaw Super Late Models and OSCAAR Modifieds. Fans can find the full schedule details at www.peterboroughspeedway.com.