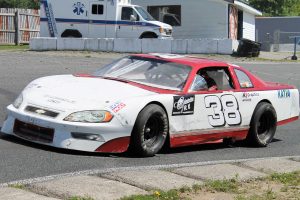 Racing’s rumor mill runs rampant during the off-season, waiting until opening night to be confirmed when drivers and teams put their cards on the table. The green flag flies with the Country 105 opener – featuring free spectator grandstand admission – Saturday, May 18th to kick-off the 52nd consecutive year of operation at Peterborough Speedway. With a new schedule of action on the horizon, there’ll be plenty for fans to look forward to at Canada’s Toughest 3rd of a Mile Paved Oval.

After having Ryan Oosterholt wheel its equipment last year, the Trent Lakes Complete Plumbing Renegade Truck championship winning team from Black Flag Racing has tapped former Ontario Legends Series standout Nicholas Ledson to be its primary driver. Ledson – who will return to the Legends Tour full-time in 2019 – will be joined by home track regular Brad Lavalle in pursuit of a second straight title.

When he isn’t sharing the driving duties of the #26 Renegade Truck, Brad Lavalle – whose family has been a fixture at the tight, tricky bullring on Mount Pleasant Road for more than 2 decades – will be kept busy helping to prepare and maintain a fleet of racing machines. He’ll be back behind the wheel of his own Bone Stock ride; but in a new car this year, while his oldest brother Christen makes his debut in the same class. John Lavalle will once again pilot the family-owned Super Stock.

2019 pit stops: The Trent Lakes Complete Plumbing Renegade Truck field will be bolstered by 15-year-old Nathan Brooks in the #94 machine. The youngster is a former championship-winning kart racer, with the Kawartha Durham Kart Club…After a couple of years in the Battlefield Equipment Rental Bone Stock division, Mike Feeney will make the jump to the Renegade Truck ranks…Brandon Feeney – who started last year in a Super Stock ride – will return to the #38 Late Model that earned the division’s rookie of the year award and saw him finish 9th in the 2018 point standings. Brandon Feeney also has plans to run selected events with the OSCAAR Hot Rod Series…Jeremy Gerrow hopes to run the full season in the Super Stock division, but says his plans will depend on the level of sponsorship he is able to secure…After running the Pure Stock class from 2010 to 2012 at the former Mosport oval, Oshawa’s Kyle Hope will campaign his #03 machine in Peterborough’s Bone Stock field for 2019.

Peterborough Speedway will once again have a presence at the Motorama Custom Car and Motorsports Expo. This year’s edition – March 8th, 9th and 10th at the International Centre – will be an opportunity for fans to meet some of the track officials and pick-up a copy of the exciting 2019 event schedule.

Be sure to keep checking www.peterboroughspeedway.com for the latest off-season news and information. The Peterborough Speedway social media sites including Facebook and Twitter can also provide valuable information leading-up to this year’s Saturday, May 18th opening night and throughout the schedule.