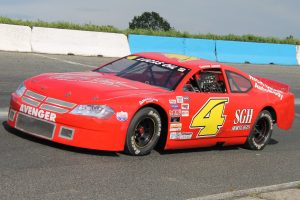 Racers are always hoping to be noticed. They want their performance in a particular event or season to be something fans will talk about on the way home from the track, the next day on social media or around the water cooler when they’re back at work. Throughout his 2017 season, Connor James is getting noticed. Whether its behind the wheel of his Ontario Modifieds Racing Series ride or at the controls of a Lucas Oil Sportsman Cup Series machine, the 20 year-old from Bradford, Ontario has people talking.

Saturday, August 5th the young upstart scored his first career OMRS feature win at Flamboro Speedway. A week later, he backed that up with a strong runner-up showing in the 100 lap LOSC main event at Peterborough Speedway. James says any level of success he’s been able to achieve is a total team effort.

“My parents have been very supportive throughout my career and have provided me with some excellent opportunities,” the driver said. “My crew guys – including Jamie Wagar, Stu Robinson Jr., Chelsea James, Willy Pickford and Jessica Boudreau – give me great equipment at every event. I’m just the lucky guy who gets to drive the cars.”

In his most recent Sportsman Cup Series start, Connor James time-trialed second quickest on the day and after the fast-five re-draw, he’d start the main event inside the second row. From the drop of the green flag, the #4 machine battled for the runner-up position and was turning some solid laps when the first yellow flag waved with board showing 15 complete. The driver took the break in the action as an opportunity to head to the infield pit area, where the team checked tire pressure and had a look under the hood before sending the car back into battle.

On the restart, James resumed his charge and was working through traffic at a strong pace. He’d moved into 3rd spot at the 26-lap mark and climbed back into second position as the field logged 3 more laps. Even though he could see the leader, James knew catching the front-runner might be a long-shot, until another yellow flew for an incident in the second turn.

“Getting close to the leader after that lap 70 caution was a plus,” Connor James said. “I noticed that I was catching-up to the #14 with just over 10 laps remaining, but when he passed a slower car that ended-up in between the 2 of us, that pretty much sealed the deal. A win would have been nice, but there’s nothing wrong with a second-place finish.”