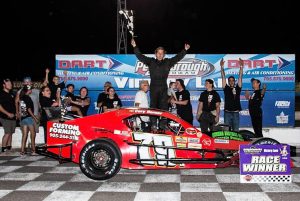 First on the docket for feature events was a 20 lapper for the OSCAAR Pro Sprints. Tyler Cullen and Kevin Taylor paced the pack to the line, but it was Brody Rickwood who led the first lap. The field encountered backmarkers with just 3 circuits complete and the pace was slowed for the first and only caution just a couple of laps later. Daniel Hawn took the lead on the restart and the current point leader never looked back. James Stanley, Cullen, Ryan Battilana and Rob Summers chased the leader across the line. 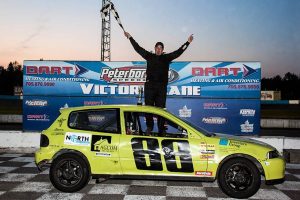 Hawn, Jaden Riddel and Rickwood (with a pair) were the heat race winners.

Corey Strawn and Chris Tubman led the way for the 20 lap Battlefield Equipment Rental Bone Stock feature event. Strawn used the inside line to take an early lead and the race ran caution-free until a yellow flag for an issue in the 3rd turn with 15 laps complete. Tubman wrestled the top spot away on the restart and held on for the checkered flag. Ryan Oosterholt, Strawn, reigning track champion Jeremy Kelly and Rob Crick rounded-out the top 5. 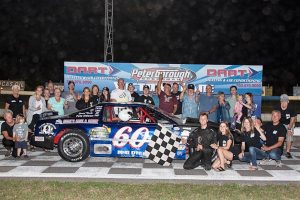 The hometown Super Stocks were next, with Miles Tyson and Paul Boundy on the front row for the 20 lap main event. A yellow flag on the initial start caused the field to be re-racked. Tyson took the lead early, but had a hungry pack knocking on his back bumper. Bailey Jacobs moved into 3rd with 7 laps on the board and the field caught the tail-end of the pack just 2 laps after that. Everyone got a chance to catch their breath when the yellow flew again for 3rd turn issue at the halfway mark. Tyson held onto the lead for a couple of laps after the restart, but Jacobs wheeled his strong #60 piece to the front with a dozen laps complete and never looked back. Rob Richards, Tyson, Marlie Owen and Tim Burke followed Jacobs to the checkered flag.

With Tiffany Vanderbelt and Ember Junkin leading the way, the Jiffy Lube Mini Stock teams rolled from the staging area for their headline dance. 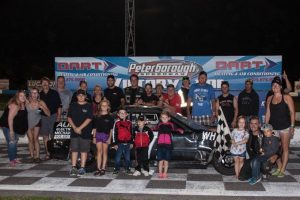 The ladies ran side-by-side for the early stages of the race, before Vanderbelt took control with the lap counter showing 4 complete. Ryan Oosterholt took over the runner-up on lap 7 and used an outside line pass to grab the lead a couple of circuits later. Last week’s feature winner Nolan Gould moved into second spot on lap 11 and was closing on Oosterholt in lapped traffic with less than a handful of circuits remaining but couldn’t catch the #79. Kent Missons, Kevin Strutt and Vanderbelt were next across the line.

The final feature event of the night was a 40 lapper for the OSCAAR Modifieds, with Cory Horner and Jeff Showler bringing the pack of 20 starters to the Great Canadian RV green flag. Horner broke from the pack on the drop of the green flag, with Kelly Balson moving into 2nd. The lead duo had caught the tail end of the field with 7 laps complete before the pace was slowed for an issue on the backstretch on lap 9. A.J. Emms moved into 3rd spot after the restart, with reigning series champion Luke Gignac taking 4th. Balson was on Horner’s 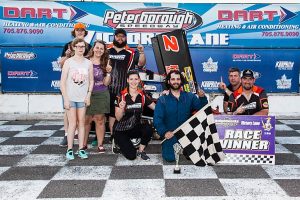 back bumper and looking for a way around the leader when an incident in the 3rd turn with 27 laps down slowed his charge. Emms took over 2nd on the restart, but Horner was untouchable on the way to his second win of the year. Emms, Balson, Showler and John Harper completed the top 5. With the win, Horner and Harper unofficially swapped 1st and 2nd positions in the point standings.

All main event finishes are unofficial and subject to scoring review as well as post-race safety and technical inspection.

Bullring bullet points: Leslie Novio of Little Britain, Ontario took home the $591.00 winner’s share in the night’s 50/50 draw…Mitch Cook wheeled the #2 Bone Stock for Bryan Knox, while Terri-Anne Whittern took a turn in the Boundy Roofing #08. Chris MacDonald made his 2108 Peterborough Speedway debut in the #03 Mini Stock…The red flag flew a couple of times during feature race action. Ember Junkin made hard contact with the first turn wall during the Mini Stock ‘A’ main and Mike Hearty rode the back stretch retaining wall the OSCAAR Mod feature. Neither driver was hurt, but their cars were unable to continue.

Action returns to Canada’s Toughest 3rd of a Mile Paved Oval Saturday, August 11th. The 100 lap Lucas Oil Sportsman Cup Series ‘A’ main will be the special attraction, along with 50 lap feature for the Battlefield Equipment Rental Bone Stocks. The hometown Trent Lakes Complete Plumbing Renegade Trucks and Late Models; plus timed spectator laps for King of the Hill will also be on the show. Times posted in the original schedule have been moved ahead 1 hour. Pit gates will now open at 1:00, with general admission grandstands unlocked at 4:00 and racing starting at 5:00.