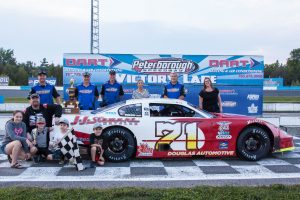 Feature race action got underway with a 30 lapper for the Late Models, with Amanda Balson and Mark Gordon on the front row. Balson took the lead early, with Derek Lynch slipping into the runner-up spot. The pace slowed on lap 4 for an incident in the 3rd turn. Dan McHattie moved into 2nd with 7 laps on the board and took over the lead just a couple of laps later. Mike Wallace claimed 2nd as the pack clicked-off the 11th lap, but the checkered flag belonged to McHattie. Balson, Gordon and Kyle Batty rounded-out the top 5.

Melissa Bullen and Ryan Oosterholt brought the Jiffy Lube Mini Stocks to the Great Canadian RV green flag for a 20 lap ‘A’ main to decide the track championship. Oosterholt took the lead from his outside front-row starting spot, with Kent Missons moving into 2nd. The lead duo was joined by Nolan Gould for a 3 car break-away and was working through the backmarkers with 14 laps complete. Oosterholt held on for with checkered flag, with the brother and sister pairing of Josh and Melissa Bullen completing the fast 5.

Missons had a pair of Mini Stock qualifier wins, with the others going to Jassen Whyte and Oosterholt. 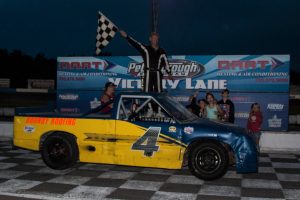 With Jeff Dolley and Ryan Oosterholt leading the way, the Trent Lakes Complete Plumbing Renegade Trucks rolled from the staging area for their 15 lap feature. Dolley led the entire race distance, with Terri-Anne Whittern, Stephen Bierworth, Oosterholt and Bill O’Hara following the #4 machine across the line. 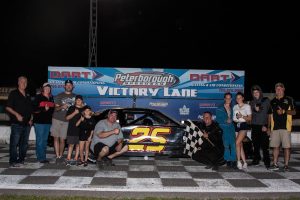 with Marlie Owen moving into 2nd. The lead duo caught the tail-end of the field and began lapping slower cars near the halfway mark. The race’s only yellow waved for a turn 3 issue with 13 laps complete. Tyler Betts wrestled 2nd away from Owen on the restart, but it was Mark Gordon’s turn to pose for photos in DART Heating & Air Conditioning Victory Lane. Tyler Bouillon and Kyle Gordon chased the leaders to the stripe. 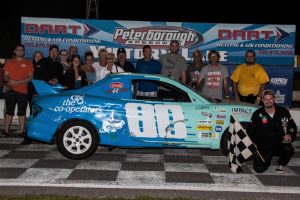 The Battlefield Equipment Rental Bone Stocks wrapped-up Peterborough Speedway’s hometown divisions, with 20 laps of feature race action that had Dave Feeney and reigning track champion Jeremy Kelly on the front row. With around 45 different drivers making at least one race, the Bone Stock class has been filled with excitement. Kelly got an early advantage on Feeney and with the rest of the pack in his rear-view mirror, he caught the back of the pack with only 4 laps complete. Other than a restart following a 6th lap caution, the outcome was never in doubt. Chris Tubman, Ryan Oosterholt, Sean Kennedy and Alex McGibbon followed the #80 machine to the line.

Willow Barberstock and Randy Hollingsworth led the pack of Ontario Modifieds Racing Series – powered by Torque Builders Inc. – machines to the green flag for their 25 lap feature tilt. Former series champion John Baker Jr. quickly worked his way into lead, bringing Josh Gruntz – another former Thunder Car/Super Stock regular – along with him. With slower cars becoming a factor with about a 5th of the race complete, Amanda Balson closed on the lead duo and snatched 2nd place away with 11 circuits on the board. A lap 13 yellow bunched field and saw Anthony DiBello take the runner-up spot on the restart. Baker Jr. moved-out to a 5 car length advantage and held-on for the win. DiBello, Balson, Chad Strawn and Bob Franks were next across the line.

The Championship Clash concluded with 10 lap shootouts featuring the top finishers in each of the weekly divisions. Dan McHattie picked a random envelope giving him an extra $400 and selected Kyle Batty’s name for a $100 draw prize. Ryan Oosterholt grabbed the checkered flag and a $125 payoff in the Mini Stock dash and selected Melissa Bullen for $70 in the pill draw. Stephen Bierworth won the Renegade Truck shootout, earning double his 2018 point fund payout, then gave Terri-Anne Whittern $75 in the blind draw. With a single checkered flag, Kyle Gordon doubled his Super Stock point fund payout and added $100 to the coffers of Paul Boundy’s #08 team in the random draw. Bone Stock rookie Alex McGibbon had a $100 shootout win and he selected Jack Hannah for a $50 payday.

Bullring bullet points: The night’s 50/50 winner of almost $612 was Lorne Bartholomew of Omemee, Ontario…Even on the final night of the season, there were different racers showing-up in different places. Reigning Late Model track champion Tyler Betts took a seat a couple of rides. He was the guest driver of Howie Crowe’s #28 Super Stock and the #95 OMRS machine. Amanda Balson ran her own #16 Late Model and the #77 Modified. Former series champion Donny Beatty returned to the Modified ranks in Craig Scott’s #69. Former go-karter Alex Cuzzilla make his first career OMRS start.