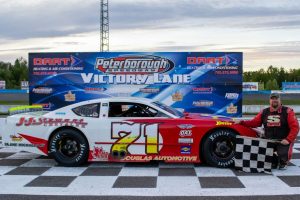 When the green flag dropped, all the talking stopped.

Drivers and teams were ready to put it all on the line as the 2019 championships in the Battlefield Equipment Rental Bone Stock, Jiffy Lube Mini Stock, Trent Lakes Complete Plumbing Renegade Truck, KOD Disposal Super Stock and Late Model divisions; along with the travelling Ontario Modifieds Racing Series were decided – Saturday, August 31st – at Peterborough Speedway.

Bobby Cousineau and Tim Batty brought the hometown Late Model field to the green flag for a 25 lapper to kick off the night’s feature race action. Batty took the lead from the outside line, with Cousineau looking strong. Dave Morgan took the runner-up spot with 5 laps on the board as Dan McHattie worked around the top of the track to take 3rd. Dave Morgan looked to the inside line and took over the lead with 8 complete. The field was regrouped following a yellow flag for an issue in the 4th turn and McHattie used an open door on the bottom groove to take the lead just before halfway. Morgan held-on for the runner-up spot, with Tim Batty, Cousineau and Brandon Feeney completing the top 5.

With Ember Junkin and Victor Vowles leading the way, the Jiffy Lube Mini Stocks rolled from the staging area for their 20 lap feature. Junkin led 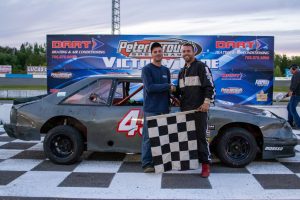 early, with Nolan Gould taking the runner-up spot. The battle at the front of the pack was strong, but a yellow flag with 7 circuits complete slowed the pace. Ryan DiBello was looking for a turn at the front on the restart and secured the spot with 13 laps down. Oosterholt took a couple of stabs at the leader but couldn’t take over the position. DiBello held on for the win, with Oosterholt, Junkin, Gould and Neil Hannah completed the top 5. 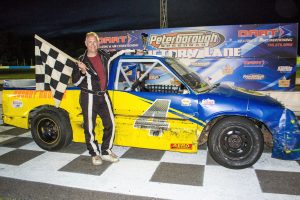 Stacy Switzer and Bill O’Hara had the front row starting spots as the Trent Lakes Complete Plumbing Renegade Trucks rolled to the line. O’Hara took the lead early, but the race’s first yellow flag waved with just a single lap on the scoreboard. Jeff Dolley took over at the front of the pack on the restart, with O’Hara and Switzer battling for 2nd behind him. Switzer claimed the position with 8 laps complete and was looking for the lead with about 5 laps to go. A final yellow with just 3 laps remaining slowed the pace but didn’t change the race’s outcome. Dolley scored the win over Switzer, O’Hara, Michael Feeney and Stephen Bierworth.

Howie Crowe and Paul Boundy were on the front row as the KOD Disposal Super Stocks hit the tight, tricky bullring on Mount Pleasant Road for the 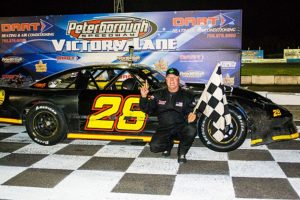 final time in the 2019 regular season. Dan Archibald made his presence known as he moved into the 2nd spot with a 3-wide move on the front stretch. Backmarkers came into play just past the halfway mark, but early leader Crowe was the class of the field. Marlie Owen clicked-off some fast laps in pursuit of the #07 machine but settled for 3rd at the checkered flag. Mark Gordon and Tim Burke rounded-out the fast 5. 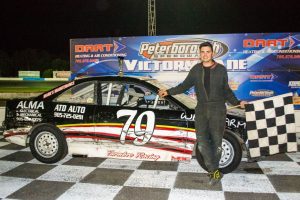 Jack Hannah and Sam Arnott showed the way as the Battlefield Equipment Rental Bone Stocks rolled to the green flag 24 cars strong. Before a single lap could be scored a hard crash on the backstretch affected several of the point contenders. With the field back under green, Hannah kept control of things with Ryan Oosterholt moving into 2nd. Last year’s track champion took the lead with 5 laps complete and held back Kris Khan’s lap-after-lap efforts to get around him. Hannah was 3rd. Kyle Novis and Arnott completed the top 5.

Randy Hollingsworth and Rob Warnes were on the front row as the Ontario Modifieds Racing Series wrapped-up the night’s feature race action. 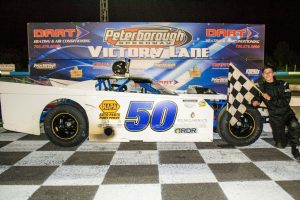 Warnes took control from the outside line but there was a red flag for an issue in the 3rd turn with only a single on the scoreboard. Young hot-shoe Alex Cuzzilla grabbed the lead on the restart, with John Baker Jr. glued to his rear bumper as the field started to work through the backmarkers just a few laps short of the halfway mark. Running nearly perfect laps over the closing the stages of the 25 lap affair, the 16-year-old held the veteran runner at bay for his first career win. Baker Jr., Rick Warnes, Rob Warnes and Craig Scott completed the top 5.

The 5 weekly divisions also ran special Top 10 Shootouts to close-out the regular season. Kyle Batty pocketed $400 for his Late Model win and picked Steve Powell’s name in the random draw. Ryan DiBello’s Mini Stock win came with a $125 bonus and some extra cash for Nolan Gould, while winning the Renegade Truck shootout was worth $150 for Paul Boundy and some gas money for Shawn Murray. Dan Archibald collected $200 for his Super Stock shootout checkered flag and selected Howie Crowe’s name in the pill draw. A win in the Bone Stock 10 lapper netted $100 for Kris Khan, who picked Ryan Oosterholt’s chip from the hat.

All posted finishing positions are unofficial and subject to scoring review, as well as post-race technical and safety inspection.

Peterborough Speedway management, officials, staff, drivers and fans were saddened to learn of the racing crash at Spa-Francorchamps that took the life of 22-year-old F2 driver Anthoine Hubert.

The entire Peterborough Speedway team would like to thank drivers, staff and especially the fans for their support throughout the 2019 regular season.

Peterborough Speedway will hold an open practice session – Sunday, September 15th from 11:00 ‘til 4:00 – for all teams interested in running the Autumn Colours Classic. The 27th annual Super Bowl of Short Track Stock Car Racing – presented by Lucas Oil Products and Pure Country 105 – is scheduled for Friday through Sunday, October 11th to 13th at the tight, tricky bullring on Mount Pleasant Road. Full details can be found by selecting the ‘Autumn Colours’ drop-down from the track web-site.

www.peterbroughspeedway.com and the Facebook or Twitter social media platforms have all the track information you’ll need heading into the post season. There is also a free app available for smartphone users.