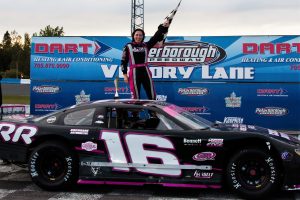 With the 2017 track titles up for grabs, teams in Peterborough Speedway’s 5 weekly divisions – along with the Ontario Modifieds Racing Series – hit Canada’s Toughest 3rd of a Mile Paved Oval to close out the regular season – Saturday, September 2nd – for the Championship Clash. New this year was the 50th Anniversary Top 10 Shootout, giving drivers some valuable season-ending bonuses.

Feature race action got underway with a 30 lapper for the Organics & Glass Late Models, as former track champion Amanda Balson and title hopeful Tyler Betts brought the field to the green flag. Balson took the lead early, as Betts slipped back a couple of positions in the order, then started to move toward the front and had taken second with a dozen laps on the board. The leader caught the tail-end of the field a lap later, as positions continued to change behind her. Ryan Kimball – another former track champion – had his #29 machine in the runner-up spot with 6 laps remaining, but Dan McHattie stole the position. Balson took the checkered flag, with McHattie, Kimball and Bryan Mercer following her across the line. A 5th place finish was enough to clinch the 2017 crown for Tyler Betts.

With 20 laps on the table, Rob Harwood and Neil Bennett started on the front row for the Jiffy Lube Mini Stock main event. James Townsend, the 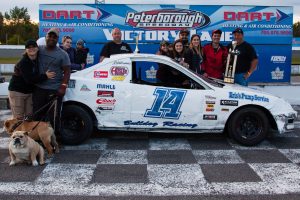 reigning track champion – who was driving the #14 for teammate Noel Snow – took the lead with 3 laps on the board. Ken Townsend followed him into the runner-up spot and the pair began working through backmarkers with 14 laps on the board. Kevin Strutt got to 3rd at the checkers, with Neil Hannah and Rob Harwood completing the top 5. The team of Townsend and Snow earned the 2017 Mini Stock championship. 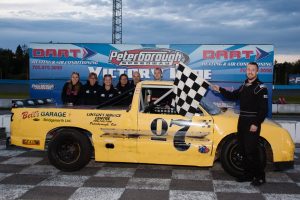 Mark Griffin and Stacy Switzer brought the Trent Lakes Complete Plumbing Renegade Truck field from the staging area for a 15-lap main event. Griffin led early, but the field was slowed for a lap 6 incident on the front-stretch. Former track champion Jack Dallin took over the top spot on the restart and had a commanding lead when the checkered flag waved. Griffin, Tim Burke, Jordan Dallin and Stacy Bierworth followed the yellow #07 truck across the line. Tim Burke – who is rumoured to be moving to the Thunder Car division in 2018 – was crowned the Renegade Truck track champion. 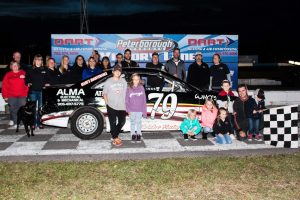 stripe for 20 laps of feature race action. A yellow flag for an issue in the second turn brought the field back together and a hard charging Ryan Oosterholt – himself a former title-holder – grabbed the lead away from Kelly. The driver of the #79 machine has made infrequent starts this season, but has always been one of the strongest runners as he took another win over Jeremy Kelly, Connor Parkes, Chris Tubman and Sean Kennedy. The second-place finish was enough to clinch the 2017 championship for Jeremy Kelly. 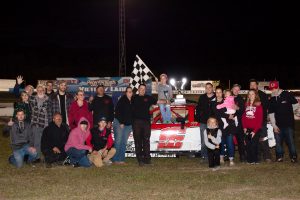 James Townsend and 2017 title contender Bailey Jacobs brought the Thunder Car field to Canada’s Toughest 3rd of a Mile Paved Oval for the 20-lap feature event that would determine this year’s track championship. Jacobs took the lead on the drop of the green flag, with point leader Anthony DiBello moving into second. The pair started working through lapped traffic on the 7th circuit, with DiBello trapping Jacobs behind the slower cars to take the lead 3 laps later. A yellow flag for a 4th turn incident with 16 laps complete tightened the running order, but couldn’t deny DiBello the race win and his 3rd championship in 4 seasons. Mark Gordon, Jacobs, Townsend and Brandon Feeney completed the top 5. 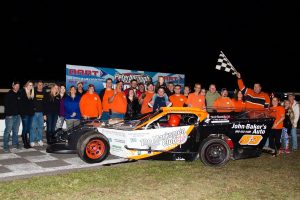 for their 25-lap title showdown. Cinnamon took the lead early, but a quick yellow flag before the first lap was scored necessitated a complete restart. The #41 machine regained the top spot, with a 3-wide battle for 3rd, 4th and 5th going-on behind him. The yellow hanky waved again on lap 11 for an issue on the backstretch. John Baker Jr. – who had started 6th – took the lead on the 17th lap and held on for his 3rd straight win. Cinnamon was second, with Mark Gordon, Connor James and Stu Robinson Jr. next to cross the line. Brad Stevenson – who came into the event with a strong point lead – clinched the OMRS point crown, even though he didn’t finish the race due to radiator issues.

Bullring bullet points: Lindsay, Ontario’s Greg Mohr won the Millbrook Legion 50/50 draw of $778.50…The late season round of racing musical chairs continued with Mark Griffin wheeling the #55 Renegade Truck. Bailey Brown took over the #55x 4Fun machine, with Connor Parkes in the #57 4Fun ride. Mark Gordon dusted-off the #66 Thunder Car from the Crowe Boyz stable for the final night of action…For one of the first times in recent history, Peterborough Speedway ran its full regular season without a single weather cancellation. The Championship Clash event concluded just after 10:00 and less than 15 minutes south of the track, rain had soaked the highway.

Race action takes a break until the running of the 25th Annual Autumn Colours Classic – October 6th, 7th and 8th – at Peterborough Speedway. Full details on the Super Bowl of short track stock car racing can be found by selecting the ‘Autumn Colours’ tab at www.peterboroughspeedway.com.