Pressure is nothing new for drivers on the local racing scene. Saturday, September 4th, teams at Peterborough Speedway felt the weight of scoring as many points as possible as the 2021 championships in the home track divisions were decided at Canada’s Toughest 3rd Mile Oval. 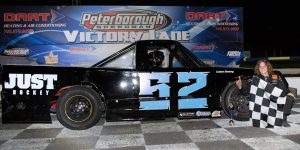 Stephen Bierworth and Paul Boundy showed the way as the Trent Lakes Complete Plumbing Renegade Trucks opened the night’s feature race action with 15 laps to settle the score. Boundy took the lead from his starting spot on the outside of the front row but it wasn’t long before Kyle Gordon was on his back bumper. The driver of the No. 52 truck kept looking for an opening and took the top spot with just a couple of laps remaining. Gordon took his first career Renegade Truck win over Stacy Switzer, Ryan Oosterholt, Stephen Bierworth and Shawn Murray.

With Rick Warnes and Bob Franks on the front row, the Ontario Modifieds Racing Series, presented by GEN-3 Electrical came to the line for their 25 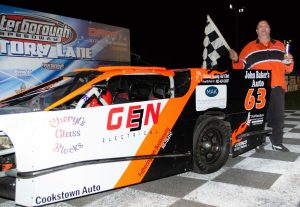 lap headline dance. Franks picked-up the early year, with John Baker Jr. charging toward the front of the pack. JBJ wrestled-away the top spot, with Chad Strawn taking 3rd with 6 laps on the board. The race’s first yellow flag waved for an issue in the 2nd turn, with 14 laps complete. Back under green, it was Baker Jr. and Strawn on the front row in a 2-car breakaway.

Strawn slowed to a stop in the first turn to bring out a lap 21 yellow flag and that opened the door to another win for John Baker Jr. Franks, Warnes, Ben Gruntz and Shane Pollock completed the top 5. 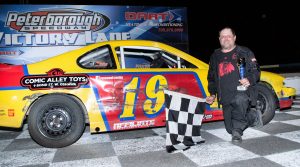 Sean Kennedy and Shawn Solomon brought the 20 car Battlefield Equipment Rental Bone Stock starting field from the staging area for their 20 lap feature tilt. Like Paul Boundy and Bob Franks in the features before him, Solomon found the outside line to his liking while Kennedy kept pace with the No. 19 machine. The duo started to work through slower traffic with about a quarter of the race distance complete as Ryan Oosterholt moved into 3rd. A red flag for a backstretch wreck just past halfway brought everything to a halt, but Solomon and Kennedy picked-up where they’d left off with the field back under green and stayed that way ‘til the checkered flag. Kris Khan was 3rd, with Kyle Novis and Steve Finnegan completing the top 5.

With his win, Shawn Solomon clinched the 2021 Bone Stock championship.

Robert Cousineau and Steve Powell were on the front row as the Late Model teams headed for the Great Canadian RV green flag with 25 on the table. 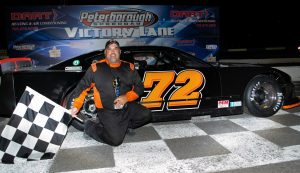 Cousineau grabbed the early lead, but Powell took it away on the 2nd lap. Just to make things interesting, Bryan Mercer became the race’s 3rd different leader in as many laps just a circuit later. Championship hopefuls Mercer and Dan McHattie – who started the night just 2 points apart – were joined by Powell and ran nose to tail until a yellow flag for an incident in the 2nd turn with 17 laps complete. Powell took the lead on the restart and survived a late race caution to take his first career feature win. Tim Batty, Sean Walker, Mark Gordon and Tyler Junkin followed the driver of the No. 72 car across the line.

McHattie and Mercer each had a pair of Late Model opening round checkered flags. 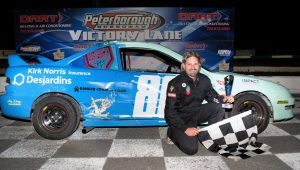 Brock Baker and Ryan Edwards-Kiss paced the Jiffy Lube Mini Stock field to the line for their feature event. Back to the outside line of Canada’s Toughest 3rd Mile Oval saw Ryan Edwards-Kiss take the early lead; a spot he surrendered to Jeremy Kelly with only 3 laps complete. Kelly had about a 10 car length advantage when the race’s first yellow flag flew near the halfway mark. The restart put Ember Junkin on his back bumper, but he held off every challenge and survived another caution flag to take the win. Edwards-Kiss was 3rd, with Josh Bullen and Kevin Strutt next at the stripe.

With the victory, Jeremy Kelly was unofficially named 2021 Mini Stock champion by a 1 point margin.

Oosterholt had a pair of Mini Stock heat wins, with the others split between Kelly and Ember Junkin.

With Anthony DiBello and Bailey Jacobs on the front row, the KOD Disposal Super Stock teams hit the track close to 15 strong to battle for 25 laps. 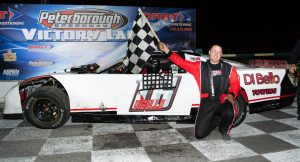 DiBello took the early lead, but Jacobs wasn’t about to sit back and watch the race. The pair raced each other nose-to-tail throughout the main event. Not even a yellow flag for an issue in the 3rd turn could keep them apart. As the lead duo did their part, so did Marlie Owen who was marching through the field and running laps that were equal to or faster than the pace of the leaders. As the checkered flag flew, she just ran out of time and took 3rd. DiBello and Jacobs were first across the line. James Townsend and Jeffrey Remington finished 4th and 5th respectively.

In a special event for first-year Bone Stock drivers – presented by Comic Alley Toys – John Bates took the win and a $100 payday. Kyle Johnson, Cory Horne and Zachary Cheng were next across the line.

Bullring bullet points: Norman Hamilton of Scarborough collected more than $750 in the night’s ‘Share the Wealth’ draw…Even though it was the final night of the regular season, several drivers made their first starts of the year including Johnny McIntyre and Ethan Marco in the Bone Stock field and Cameron McGlashan, Will Myatt, Dylan Bowman and Josh Bullen in the Mini Stock ranks…It was a rough night for former Bone Stock/Mini Stock track champion Ryan Oosterholt. Contact with another car during the Bone Stock feature resulted in the No. 79 machine taking a wild ride on the backstretch and landing on his roof. Although cleared by safety crews, the driver took the rest of the night off and had Tyler Betts drive his car in the Mini Stock ‘A’ main.

Track officials have confirmed plans for the 2021 edition of the Autumn Colours Classic. After a one year break, the Super Bowl of Stock Car Racing – presented by Lucas Oil Products will return October 8th, 9th and 10th. Information on advance ticket sales – by clicking the ‘buy tickets’ button on the track website – will be available as of Friday, September 10th. Staff is also looking at holding an open practice session Saturday, October 2nd from 11:00 ‘til 2:00.