Main event action for the night got rolling with a 20 lapper for the Paul Davis Systems Thunder Cars, with Tom Podd and Nick Oram in the front row. Oram used the tough, outside line to take an early lead with title rivals Bailey Jacobs and Howie Crowe moving into 3rd and 5th in the running order. A yellow for an incident in the 3rd turn with 7 laps complete slowed the pace, but Oram was still in control of the

field. Crowe would move into the runner-up spot and stayed there until the checkered flag. James Townsend, Jacobs and Rob Richards rounded-out the top 5. His second place finish gave Howie Crowe the Thunder Car crown. 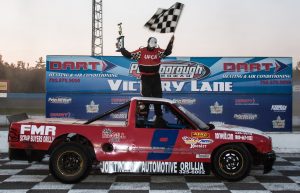 the stripe for their 15 lap feature. Within just a few laps, Chris Burrage had taken over the top spot, with last season’s title-holder Jack Dallin on his tailgate. The pair ran some torrid laps to keep the crowd on the edge of their seats, but Burrage won the battle and the war, taking the division championship with another feature win. Jack Dallin, Stephen Bierworth, Doug Dallin and Stacy Bierworth followed Burrage across the line.

the staging area for their 20 lap season-ending headline dance. With another track championship still slightly within his grasp, Tyler Junkin took and early lead and was catching the tail of the field as the scoreboard showed 7 laps complete. James Townsend had worked his way into the runner-up spot with 5 laps to go, but heavy traffic had him almost a half a track behind the leader. As the checkered flag flew to give Junkin the feature win, Townsend locked-up the title with his second place effort. Donovan Price, Tiffany Vanderbelt and Kevin Strutt had great seats for the title fight and finished 3rd, 4th and 5th respectively.

Mike Wallace and Amanda Balson led the Earl Ireland Auto Sales Late Models for the 30 lap main event that would determine the 2016 track championship. From the drop of the green flag, Wallace ran the bottom line so well, it would’ve taken a crowbar to move him out of the preferred groove. He was still leading at halfway and when a nudge moved him out of the way to bring-out a lap 21 yellow flag, he got the position pack when the other driver involved took blame for the spin. Another quick yellow a lap later tightened the running order and as the field saw 24 circuits complete, point leader Rick Spencer-Walt had moved into the top spot and claimed the track title. Former champion Bryan Sudsbury was 2nd, with Dan McHattie, Balson and Jack Horner finishing out the top 5. Wallace was 6th at the line.

Dave Feeney and Shawn Solomon paced the Battlefield Equipment Rental 4Fun field to the Great Canadian RV feature race green flag that would close out action for Peterborough Speedway’s regular divisions. Feeney grabbed an early lead as the 25 starters battled around the tight, tricky bulling on Mount Pleasant Road, west of the Liftlock City. The leaders caught the back of the pack within 6 laps on the board. Using a restart from a lap 11 caution flag, defending track champion Ryan Oosterholt grabbed the lead and title hopeful Jeremy Kelly moved into second spot 3 laps later. Kelly – who came into the night with a 19-point cushion – took the crown as he followed Oosterholt across the line. Feeney, Jake Kelly and Sean Kennedy completed the top 5.

Oval. Glen Watson took the checkered flag, with Fitzpatrick and Gary Passer joining him to advance to the next round of the championship chase that will be decided at the Autumn Colours Classic. The full race story can be found at www.oscaar.ca.

Bullring Bullet Points: Brian Bichener of Oshawa, Ontario took home $641 by winning the night’s 50/50 draw, in support of the Millbrook Lions Club…Even though he entered the night within 6 points of the Late Model track championship, an out of town obligation kept hometown favourite Chris Mitchell from attending the Championship Clash. The former Autumn Colours champ relinquished the driving duties to Dan McHattie, who has helped set-up the car all season.