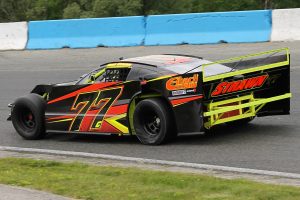 Racers at every level start the year with a pre-season checklist. The teams with the Ontario Modifieds Racing Series – powered by Torque Builders Inc. – may have taken a while to get the schedule started after a late-May rainout; but Saturday, June 9th they gave the crowd at Peterborough Speedway some excellent value for their motorsports entertainment dollar.

Randy Hollingsworth and former series champion Rob Warnes brought the field to the green flag, with Warnes taking the early lead from his starting spot on the outside of the front row. Chad Strawn – who is making his return to the popular open-wheeled tour in 2018 – moved into the runner-up position and would wrestle the lead away from Warnes with the scoreboard showing 3 laps complete.

Anthony DiBello – the 2017 Peterborough Speedway Thunder Car/Super Stock track champion – was looking to take his turn at the front of the pack and matched Strawn’s lap times as the pair caught the tail-end of the field with just a handful of laps remaining. Try as he might, DiBello couldn’t get around the #77C machine, as Strawn became the first OMRS feature winner of the year.

“I need to thank Graham Annis for some last-minute changes that made the car better in the feature,” Chad Strawn said. “I had a mirror full of the #16 but managed to hold-off Anthony for the win. Thanks to the sponsors, family, friends and fans. Couldn’t do it without you.”

Rick Warnes got the better of his son for the 3rd spot, while Rob Warnes and Hollingsworth completed the top 5. Bob Franks, Craig Stevenson, Willow Barberstock, Brock Baker and Craig Scott rounded-out the finishing order.

Ontario Modifieds Racing Series notebook: An issue with a leading rad on the #77 machine kept reigning series champion Brad Stevenson from the OMRS feature line-up…2016 tour champion John Baker Jr. was kept out of the driver’s seat after a recent round of surgery. He relinquished the driving controls of his #63 ride to his son Brock, who ran some laps to get some seat time…Prior to the night of racing, the Ontario Modifieds Racing Series hosted its annual ‘Test-a-Mod’ day to give drivers from other divisions and series the chance to experience the open-wheeled equipment…Next on the schedule is the first ever OMRS visit to Sauble Speedway on Saturday, June 16th.

For over a decade, Torque Builders Inc. has worked with partners and clients in the construction industry, offering new, general construction services, renovations and retrofits in the industrial, commercial and institutional sector. Visit www.torquebuilders.com to find out more.