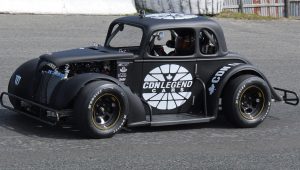 One of the country’s top touring racing series – Canadian Legend Cars – has strengthened the level of support offered to its teams as tracks add the finishing touches to their 2022 schedules. National distributor Kevin Foisy is proud to welcome fellow racer and 2021 Canadian Asphalt Nationals champion Parker Traves to the team, as a representative for the area in and around his home base of Gravenhurst, Ontario. Also joining the team will be Robbie Thompson, who will serve the drivers from his location in Aylesford, Nova Scotia.

“Having Parker and Robbie come on board will give drivers in their respective areas solid contacts for chassis, parts and set-up information,” explained Foisy. “We’ll still take care of business from our home base here in Clayton, but as more and more tracks add events to their line-ups, it makes sense for racers to have an additional connection when it comes to keeping their equipment in the starting field.”

Kevin Foisy is quick to point out that the Canadian Legend Cars program is about more than selling quality racecars. Their team is committed to a driver’s growth and development in the series, offering race winning tutelage from Parker Traves, Matt Haufe and Foisy who have earned checkered flags in some of the biggest Legends Series’ events in the country, including multiple victories in Peterborough Speedway’s Autumn Colours Classic and during the spring and fall Velocity Weekend events at Sunset Speedway.

“With the opportunity to earn points in several different classifications during the confines of the tour, Legends racers have a reputation of playing well with others when sharing information is concerned,” said Kevin Foisy, who’s Legends racing career began in 2007 and includes more than 100 main event wins. “These cars can be a step up the ladder for developing racers and they have also become a regular attraction at several different tracks across the province and around the country.”

Worldwide parts shipping in a timely manner is always available.

See what’s new for the 2022 season and meet the Canadian Legend Cars team during the return of the Motorama Custom Car and Motorsports Expo – March 11th, 12th & 13th – at the International Centre in Toronto.