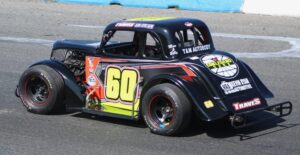 Drivers and teams with the Trailers Plus Canadian Legend Car Series are getting close to wrapping-up this year’s schedule. Before the curtain falls on the 2022 campaign there is a final bit of business to take care of, as the tour heads to Peterborough Speedway for the 29th running of the Autumn Colours Classic.

In 2021, Matt Haufe picked-up the checkered flag, with Braden Langille – of Shubenacadie, Nova Scotia, in his first career Peterborough Speedway start – Nicholas Ledson, Parker Traves and Hudson Nagy rounding-out the top 5. With a pair of 30-lap features on this year’s agenda, Canadian Legend Car Series owner and spokesperson Kevin Foisy says every team in the line-up will be chasing the honour and prestige that comes with a win in the Central Ontario oval’s marquee event.

“Other than a couple of early rainouts, 2022 was a great season,” Kevin Foisy explained. “Our car counts were some of the best in series history. Stats show more than 40 different teams scored points in at least 1 event during the year. A lot of travelling groups would be thrilled to show some numbers like that at the end of the schedule.”

From the drop of the initial green flag, Parker Traves has held the hot hand with the Canadian Legend Car Series. The driver of the No. 60 machine had 8 main event checkered flags, 11 top-5 finishes and 11 qualifying race wins. Heading into the Autumn Colours Classic, he has a 132-point advantage over runner-up Adam Cuthbertson. Jordan Latimer, Zach Latimer and Paul Pierik round-out the first 5 spots in the standings.

Foisy says that while nothing is official until the checkered flag waves at the end of the Autumn Colours weekend, all indications point to Traves being crowned the 2022 Canadian Legend Car champion. Saturday, October 8th the first of the weekend’s pair of main events will be presented by Bay Marine, based in Trenton, Ontario. Tour officials would also like to thank everyone at title sponsor Trailers Plus, as well as the team at KOD Disposal for their continued support of the popular brand.

For additional details on the 2022 Canadian Legend Car Series schedule or to obtain parts, service, set-up chassis and engine repair as well as technical support, head to www.facebook.com/canadianlegendcars, www.cdnlegendcars.ca or message canadianlegendcars@gmail.com