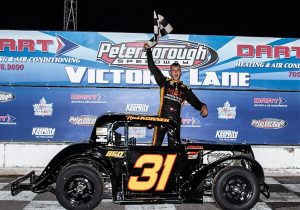 The finale for the inaugural running of the Canadian Legend Car Asphalt Nationals was the featured attraction – Saturday, July 14th – at Peterborough Speedway. Also the program were the home track Battlefield Equipment Rental Bone Stock, Jiffy Lube Mini Stock and Late Model divisions. Timed spectator laps for King of the Hill took to the track during intermission.

Kyle Novis and Jack Hannah brought the 26 car Battlefield Equipment Rental Bone Stock starting field to the line for their 20 lap main event. Hannah took the early lead, with a 3-wide battle for 2nd place going on in his mirror, as Sean Kennedy settled-in to the runner-up spot. The race’s first yellow flag flew 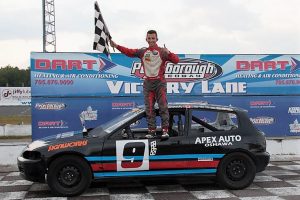 for a second turn incident with 3 laps on the scoreboard. A 5-way clash for the lead went to Kennedy on the 7th lap and he began catching the tail of the field close to handful of circuits later. Chris Tubman and Ryan Oosterholt fought over 2nd, with the #88 machine taking the position as Kennedy claimed his first win of the year. Jeremy Kelly and Alex McGibbon rounded-out the top 5. 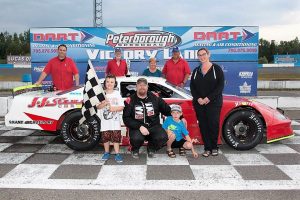 With 30 laps to settle the score, the Late Model division rolled from the staging area with a pair of former track champions – Amanda Balson and Dan McHattie – on the front row. McHattie snatched the lead from his outside front-row starting spot, with Chris Mitchell working on Mike Wallace to see who’d be next in line. The leaders began to put the backmarkers a lap down with a dozen laps on the board and Mitchell finally wrestled the second spot from Wallace with 20 complete. A couple of late race yellow flags couldn’t deny McHattie from another hometown win. Reigning Lucas Oil Sportsman Cup Series rookie of the year Connor James was 3rd, with James Horner and Wallace following the lead trio to the stripe.

Girl power – in the form of Ember Junkin and Tiffany Vandebelt – paced the Jiffy Lube Mini Stocks to the Great Canadian RV green flag. A caution on 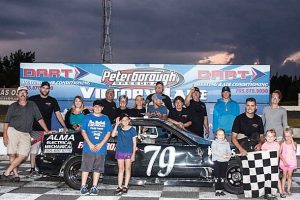 the initial start delayed things, but Junkin moved-out to an early lead and caught the back of the pack with around 5 laps on the board. A yellow flag for a front stretch incident with 7 complete slowed the pace again and saw Josh Bullen take the lead on the restart. The driver of the #66 Mustang was having a great run, but then Ryan Oosterholt stole the position away and never looked back. Bullen held-on for a 2nd place finish. Nolan Gould, Junkin and Miles Tyson took the next 3 spots.

Oosterholt had a couple of Mini Stock heat wins, with the others going to Kevin Strutt and James Townsend.

With the goal of being crowned the first-ever Canadian Legend Car Asphalt Nationals champion, 23 teams took the green flag with a pair of U.S. invaders – Alex McCollum and Noah Korner – on the front row. After a quick yellow flag called-off the initial start, Korner and Nick Ledson took control of things, while McCollum slipped to 7th. The lead duo was joined by Matt Haufe in a 3-car breakaway, with Korner taking a 6 car length advantage and Haufe moving into 2nd by lap 16. A caution for a first turn issue a lap later gave everyone a chance to catch their breath and regroup for the second half of the race. A hard-charging Dave Riopelle moved into 5th on lap 20, but a red flag caused by Cole McFadden’s untimely fireball created a lengthy delay. With Ledson looking for the lead after the restart, a final yellow flag – with just a couple of laps remaining – slowed the pace. Korner, who had led from the drop of the green picked-up the win. Nick Ledson, McCollum, Haufe and Cole Ledson rounded-out the top 5.

All main event finishes are unofficial and subject to scoring review, as well as post-race safety and technical inspection.

Bullring bullet points: Darlene James of Bradford, Ontario claimed the winner’s share of nearly $572.00 in the Millbrook Lions 50/50 draw…Larry Crowe Jr. took home the bragging rights with a lap of 16.50 in his street legal 2018 Dodge Demon, during King of the Hill…Former Late Model track champion Bryan Sudsbury returned to action, wheeling the #15 Mini Stock, while Sunset Speedway regulars Paul Maltese and Connor James came to play in the Late Model ranks…Weather conditions caused track officials some concern. A heavy shower before the gates opened washed away any rubber, while a brief period of rain delayed some practice rounds. The highway just minutes from the track showed evidence of Mother Nature’s power, but the full show went into the record book in just over 4 hours.