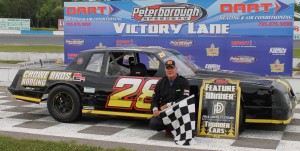 There was plenty of action Saturday, July 26th to close-out the month at Peterborough Speedway. Double features for the Paul Davis Systems Thunder Car and Earl Ireland Auto Sales Late Models were on the agenda after last week’s rain-out, with a full show including the Renegade Trucks, Inex Ontario Legends and a 100 lap endurance event to close out the night.

Fidelle DiBello and Larry Crowe Jr. brought the field to the green for the make-up 20 lap Thunder Car feature. The yellow flag was quick to fly when the #61 went around coming off the 4th turn and scattered the field. With a handful of laps complete, John Baker Jr. showed his stuff with an outside line move around Crowe and Howie Crowe took over the runner-up position. A few laps later, Baker retired from the battle, giving the lead to Crowe. After heading to the pits earlier in the event, Anthony DiBello charged from the back of the pack to take second at the checkered flag, but nothing could keep Howie Crowe from his first main event of the season. Donny Beatty, Dan Price and Larry Crowe Jr. finished-out the top 5.

Adam Cuthbertson and Craig Parry paced pack to the stripe for the rained out Late Model headline dance. Cuthbertson held the top spot for the first 3rd of the event, with Dan McHattie and Bryan Mercer hot on his tail. Mercer looked to the top side of the speedway to find a way around the leader, but slipped up the speedway and lost 4 spots in the process. Contact between Al Shepstone and Craig Graham caused cosmetic damage to the #98, but both machines were able to answer the bell for the restart. 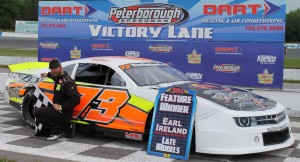 With just over a handful of laps remaining, Chris Mitchell’s #22 slid off the track in first turn and hit a safety barrier. The driver was okay, but the car was towed from the scene. On the restart, Ryan Kimball took the lead and became the first 3 time feature winner in the Late Model division. Tyler Betts, Mercer, McHattie and Cuthbertson completed the top 5.

Main events for the July 26th portion of the show began with a 15 lapper for the Parry Spring Service Renegade Trucks, with Jack Dallin and Jeff Vanderbelt on the front row. Dallin would take an early lead at the drop of the green flag and easily earned another trip to Dart Heating and Air Conditioning victory lane in the caution free event. Vanderbelt, Stephen Bierworth, Bill O’Hara and Josh Milwain finished out the top 5. 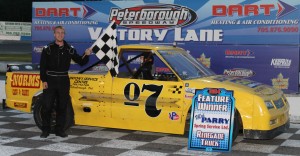 With 20 laps on the agenda, the Paul Davis Systems Thunder Car teams rumbled from the staging area with Rob Richards and Anthony DiBello in the first and second positions. Following the lead of the Renegade Truck division, the Thunder Car pack also ran their feature without a yellow flag. Taking a turn behind the wheel of Donny Beatty’s #40 machine, Stu Robinson Jr. took the win, over Jon Baker Jr., Anthony DiBello, Howie Crowe and Dan Price.

The Earl Ireland Auto Sales Late Model ‘A’ main was a 25 lap affair with 12 starters, including Bryan Mercer and Al Shepstone at the front of the field. Mercer built a 5 car length advantage on the break, with a fierce battle being waged in his rear-view mirror on the tight, tricky bullring on Mount Pleasant Road west of the Liftlock City. After taking a feature win earlier in the night, Ryan Kimball was working through traffic, but the streak of green flag racing ended when Craig Parry spun in the first turn, with 8 laps complete. Kimball moved into 3rd, with 13 laps on the scoreboard, but he was still about a half a track behind Mercer and Dan McHattie. Over the closing stages, McHattie would get close to taking the top spot but close was as close as he’d get as Mercer grabbed his second win of the year. Kimball, Shepstone and Adam Cuthbertson completed the top 5.

Inex Ontario Legends feature race action on Canada’s Toughest 3rd of a Mile was scheduled for 25 laps, with Nick Ledson and Jarrett Stewart leading the way. The pace was slowed with 7 laps complete for a spin by Cole Ledson, coming off the 4th turn. On the restart, a green flag feel developed for nearly 15 laps, before Andrew McFadden and Terry McCleland got together in turn 4, with 20 circuits on the scoreboard. As the checkered flag flew, it was last season’s series champion Nick Ledson taking the win over current point leader Matt Haufe. Stewart, Bill Mason and Brad Haufe chased the first and second place machines across the stripe.

Bullring Bullet Points: A week after Kenny Ohno Jr. won the 50/50 draw, another driver – Jamie MacArthur, from the Ontario Legends – pocketed $630.00…Colborne, Ontario’s Bailey Brown came-up just short of her career best Inex Ontario Legends finish. The 14 year-old rookie of the year hopeful and former Kawartha-Durham Kart Club standout was running 6th, but spun coming off the 4th turn, just as the race leaders took the checkered flag…A 100 lap endurance event closed-out the night’s action, but Larry Crowe Jr. came close to running more laps than that on his own. He was scheduled to complete a pair of Late Model and Thunder Car features, as well as qualifying heats for each division, for a possible of 122 laps on the night. A decision was made to concentrate on the Thunder Car and the #66 Late Model was parked after the first feature.

A new month of action for Canada’s Toughest 3rd of a Mile Paved Oval kicks off Saturday, August 2nd with the Chase for the Colours Touring Series pole qualifier show, featuring the OSCAAR Outlaw Super Late Models and OSCAAR Modifieds. Battlefield Equipment Rental 4Fun and Peterborough Hyundai Mini Stock teams will run double features and the Parry Spring Service Renegade Trucks also on the bill. Pit gates open at 2:00, with the spectator grandstands unlocked at 4:00 and racing at 6:00. Come early and enjoy the pre-race corn roast.

Fans can always find the latest news at www.peterboroughspeedway.com or by liking the track on Facebook or following it on Twitter. You can also download the free Peterborough Speedway app on your Smartphone.