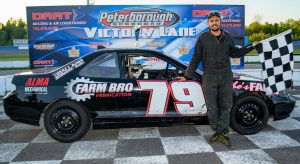 With Isaiah Switzer and Jake Kelly on the front row, the Battlefield Equipment Rental Bone Stockers were the first of the night’s regular feature events to hit the track. Kelly jumped out into an early lead and was joined by Shawn Solomon, Switzer, Steve Finnegan and Ryan Oosterholt in a 5-car breakaway. The quintet had just caught the tail-end of the field when the race’s first caution flag waived at the hallway mark. Oosterholt took the runner-up spot on the restart and was in control of the field just a couple of laps later. A second yellow – with only 4 laps remaining – couldn’t keep Oosterholt from another win, with Solomon, Kelly, Switzer and Christen Lavalle the next 4 cars across the stripe.

Ryan Oosterholt had a pair of qualifying heat wins, with the others going to Steve Finnegan and Shawn Solomon.

With 25 laps to settle the score, the Ontario Modifieds Racing Series teams rolled from the staging area with Ben Gruntz and Willow Barberstock on 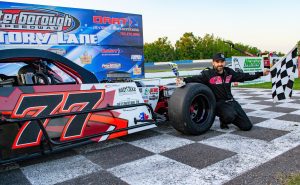 the front row. Gruntz had a strong run from the drop of the green flag and had built-up nearly a straightaway advantage over the 2nd place car, with Chad Strawn sliding into 3rd and then into the runner-up spot with just over a handful of laps on the board. The pace was slowed with about 10 circuits remaining for a single car issue in the 3rd turn. Strawn grabbed the lead on the ensuing restart, with a hard charging Alex Cuzzilla and John Baker Jr. hot on his tail. The No. 77 car survived a late race yellow and Strawn took the checkered flag over Cuzzilla, Baker Jr., Nicholas Ledson and Bob Franks.

The night’s OMRS preliminary rounds went to Chad Strawn with a pair, along with Alex Cuzzilla and John Baker Jr. 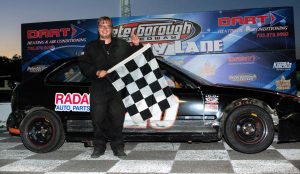 Marilyn Junkin and her daughter Ember made-up the mother and daughter front row for the 20 lap Jiffy Lube Mini Stock feature. A yellow flag on the initial start saw the field re-racked and Ryan Edwards-Kiss took the lead when the green waved again. At the halfway mark, the No. 20 was showing the fast way around the track with Ember Junkin, Brock Baker, Dylan Wills and Dwight Lavoie – in Dan Demers’ ride – filling-out the top 5. Attrition was a late race factor, as several cars dropped-out with mechanical issues. At the checkered flag, Edwards-Kiss was first across the stripe and became the first Mini Stock feature winner other than Ryan Oosterholt during the 2021 season.

John Lavalle had a couple of Mini Stock heat race wins, with the others going to Jeremy Kelly and Ryan Edwards-Kiss.

Bryan Mercer and Mark Gordon brought the Late Model starting field to the line for a 20 lap feature event. From the drop of the green flag, Mercer 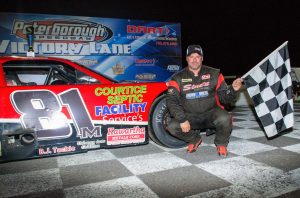 was a man on a mission and had started working through the back of the field near the 3-quarter mark of the race. The only thing that slowed his charge was a lap 16 yellow flag when Dan McHattie – who was running 2nd at the time – suffered a rare mechanical failure and was towed from the track. Mercer picked-up his first main event victory of 2021 and dedicated the win to the memory of his father who passed away in 2018.

The night’s qualifying events were shared between Mercer and Dan McHattie. 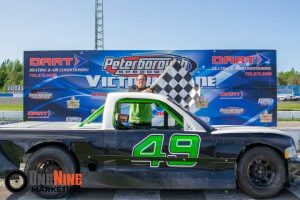 the Great Canadian RV green flag, with Oosterholt taking the early lead from his front row starting spot. The leaders started to work around slower traffic with 8 laps on the scoreboard and Oosterholt still showing the fast way around. Stacy Switzer moved into 2nd a lap later but that was the final position change of the race, as Ryan Oosterholt added a Renegade Truck win to his impressive 2021 stats. Kyle Gordon was 3rd, with Boundy and Shawn Murray completing the top 5. 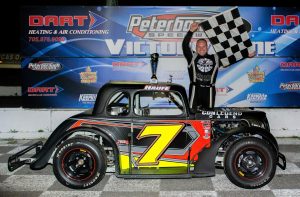 Former series champion Nicholas Ledson and recent Sauble Speedway winner Parker Traves showed the way as the Trailers Plus Ontario Legends Series wrapped-up the night of racing. Ledson took the early lead, but it didn’t take long for Traves and his Canadian Legend Car teammates to join the fray. After a pair of quick yellows, Ledson and Matt Haufe were locked in a fierce battle for the top spot. As they did earlier this season, the pair swapped the lead back and forth with Haufe taking control as the lap counter clicked-off 17 complete. The driver of the No. 7 claimed the win, with Kevin Foisy and Travis chasing him across the stripe. Ledson and Adam Cuthbertson rounded-out the top 5.

Ontario Legends Series heat race wins went to Haufe – who had a pair – Traves and Foisy.

All finishing orders are unofficial and subject to scoring review as well as post-race technical and safety inspection.

Bullring bullet points: There was another big payday in the Millbrook District Lions/Millbrook Legion Share the Wealth draw, as Glenn Dean of Caesarea, Ontario took home close to $700.00…Several teams made their first starts of the 2021 season, including Scott Simpson and Joshua Munro in the Bone Stocks and Mini Stock racers Kris Khan and Kris Inglis…The night’s racing began with a holdover Renegade Truck feature from Saturday, August 7th. Stephen Bierworth took the win over his daughter Stacy Switzer, Shawn Murray, Brad Lavalle and Paul Boundy.

For schedule updates and track information look to www.peterboroughspeedway.com or see the track’s Facebook, Twitter and Instagram social media platforms. There is also a free app available for Smartphone users.