Round 2 of a pair of COVID Championship events – presented by Crowe’s Gas Bar and Dart Heating & Air Conditioning, in partnership with Lakeport Power and Cornerstone Builders – took the green flag Saturday, September 26th at Peterborough Speedway. With the Battlefield Equipment Rental Bone Stock, Jiffy Lube Mini Stock and Trailers Plus Ontario Legend divisions on the program, a provincially regulated crowd of 100 spectators was on-hand to see the action. 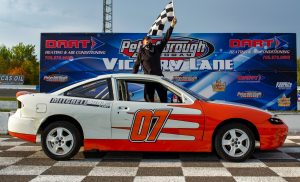 The Bone Stocks were first to hit the track for a 40-lap feature that saw Nic Ramsay and Kris Khan lead the pack to the stripe. Ramsay grabbed an early lead, with Steve Finnegan, Shawn Solomon and Ryan Oosterholt – the championship point leader – hot on his tail. As the lead pack started to work through slower traffic, Oosterholt moved to 3rd as the scoreboard clicked-off 13 laps complete. The pace was slowed a couple of times for yellow flags, but Ramsay managed to lead every lap. Solomon, Finnegan, Oosterholt and Khan completed the top 5. 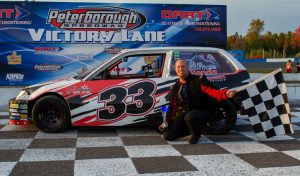 Oosterholt was once again showing the quick way around, as they caught-up with the tail end of the pack with just a handful of laps on the board. Everyone worked their way through traffic until a multi-car crash on the front stretch near the halfway mark brought things to a grinding halt. Tempers were high and metal twisted but every driver involved walked away under their own power. Another couple of yellow flags slowed the pace, but when the checkered flag flew, it was Warren Paxton in victory lane. Craig Kamrath, Tyler Junkin, Jeff Laflamme and Chandler Bos completed the top 5. 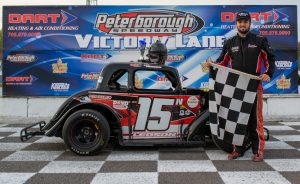 21 teams were scheduled to take the green flag for the Trailers Plus Ontario Legend Series feature. Joe Adams and Myles Tyson were on the front and there was plenty of action from the got-go. Tyson took the early as he out-dragged Adams on the start. Nick Ledson moved into the top spot just before the race’s first yellow flag waved with 9 laps on the board. On a restart from a lap 15 caution, Ledson had last week’s winner Matt Haufe, Parker Traves, Tyson and Kevin Foisy battling behind him. The multi-time tour champion was up for everything; including a late race challenge that saw him take the checkered flag backwards as the pack scattered at the stripe. Tyson, Haufe, Traves and Foisy chased Ledson across the line.

Look to www.peterboroughspeedway.com and the track’s Facebook or Twitter social media platforms for the latest news and scheduling information.