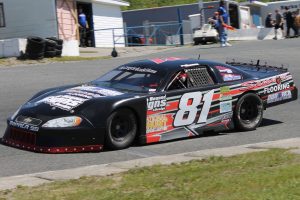 Once a racer, always a racer.

After running a limited schedule – that included a couple of main event victories – in 2015, Bryan Mercer decided to take a year off. The second-generation speedster from Port Hope, Ontario says it was one of the toughest years in his recent memory. Even though it was a plan that came together quite quickly, fans weren’t too surprised when they saw the #81 roll to the starting line at the 2017 season opener at Peterborough Speedway.

“We never stopped working on the car, but even until a couple of weeks before the opening night I wasn’t sure what I was going to do,” Mercer said. “My family and friends kind of talked me into it and the ball started rolling from there. I’ve always had some great people associated with the team, so it didn’t take much convincing.”

On the first night of the schedule, he managed a 4th place showing in the main event. During the second event of the season, Mercer says the team fought some handling issues during the qualifying rounds, but hard word by the crew found a set-up that worked well for the feature. Even though some late race cautions near the end of the 50-lap main event didn’t go his way, the team loaded the car into the hauler at the end of the night with a solid 3rd place finish. The driver says it was a positive effort and something to build on as the season rolls on.

“It was a good night and it felt great to have the gang back together at the race track,” admitted the driver, who works as a Service Advisor at Quantrill Chevrolet-GMC-Cadillac. “We’ll go over the notes through the week and make some changes in the shop before heading back to the track. I have to thank Andrew Hargreaves, Mike Lagrois, Dayton Crombie, Eric Thompson, Scott Robinson, Dan Langstaff, Sue & Dave Dennis, my son Jake and my parents for everything they do to help get the car ready.”

Follow the team behind the scenes and at the track by liking the Mercer Motorsports page at www.facebook.com.