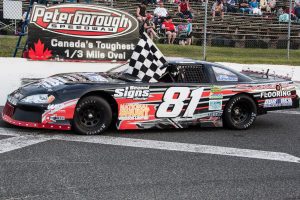 For some drivers, chasing the perfect race day set-up can almost be as difficult as chasing the checkered flag. With a pair of top 5 finishes to show for his first 2 starts of the 2017 season, Bryan Mercer would appear to have half of the equation figured out.

“I’d happily put my crew up against any of the others in the field,” Bryan Mercer proudly stated. “My team has been with me for a number of years and they’re one of the best in pits. They can take the information I give them and change the car to make it better. There isn’t always a lot of time to switch things over, but I know they’ll do the job to help get me to the front of the field.”

Saturday, June 10th Bryan Mercer took some time during the afternoon to watch his son’s ball hockey tournament and that meant the team arrived at Peterborough Speedway just as the pre-race practice sessions were wrapping-up. The driver and his team went through their set-up notes and went to work on getting ready for the night’s first qualifying event. Within a couple of laps of the green flag, contact with another car sent the #81 machine to the pits and the crew went to work.

“There’s a first time for everything and the throttle hung in the first qualifier,” the driver said. “As long as I’ve been driving, that had never happened before. We got things corrected and even though the car was a little tight, we managed to win the second heat race and made more changes for the feature.”

Mercer says from that point forward; the car was terrific. A yellow flag on the initial start moved him to the outside of the front row. Even though he would’ve preferred a spot on the preferred inside line, he made the best of the hand he’d been dealt and stayed close to the leaders. The pack worked through lapped traffic near the halfway mark and when the caution flew again with just a few laps remaining, he was once again in second spot. As the inside line slipped past, the second-generation racer from Port Hope, Ontario settled-in for a 3rd place finish.

“There wasn’t a lot of grip up top, so I took what I could get. Consistency has its rewards and we haven’t finished worse than 4th in our 3 starts. That’s something our team can take back to the shop with pride.”

Bryan Mercer returns to action at the Chase for the Autumn Colours Classic Pole Qualifier – Sunday, July 2nd – at Peterborough Speedway. Follow the team behind the scenes and at the track by liking the Mercer Motorsports page at www.facebook.com.