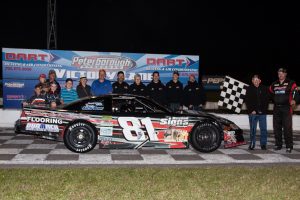 The most important adjustment a weekly short track racer doesn’t require a wrench; its all about attitude. Work at making the good races better and leave the bad ones in the past. A few days after celebrating his 44th birthday, Bryan Mercer scored his first main event win – with a checkered flag in Peterborough Speedway’s Organics & Glass Late Model division – of the 2017 season. After starting the year with a string of top 5 finishes, the second-generation racer from Port Hope, Ontario knew it was just a matter of time before he made it to victory lane.

“The crew has given me a great car that has responded well to the changes we’ve made,” Mercer said. “I’ve been really pleased with the way things have gone this year; but we still have a long way to go. I’m trying to take each race one lap at a time with a goal of a solid point finish and a strong run at the Autumn Colours Classic.”

After finishing 2nd in the first round of qualifying, the team bolted a fresh set of rubber onto the #81 Chevrolet SS. Mercer says they were looking for a different feel from car as they headed into the main event and wanted to put some fresh information into their set-up notes before the 25-lap feature race.

“The tires we took off were done. There wasn’t much grip left and if we were going to do anything in the ‘A’, that was the way to go.” the driver admitted. “I was starting on the front row again – this time in the inside line – with some heavy-hitters behind me. It where I wanted to be and I knew I had to do whatever I could to stay there.”

From the drop of the green flag, Mercer – who works as a service advisor at Quantrill Chevrolet-Cadillac-GMC – had a solid piece and kept his focus on what was happening in front of him, with occasional updates from his spotter on where others were running deeper in the field. He caught lapped traffic just before the halfway mark and survived a mid-race yellow flag that bunched the field. When the checkered flag waved, he had led every lap to earn the trip to victory lane.

“It was great to win on Fan Appreciation Night Saturday, July 8th and having my family and friends on-hand to share the moment made things even more special.”

Bryan Mercer returns to action Saturday, July 15th at Peterborough Speedway. Follow the team behind the scenes and at the track by liking the Mercer Motorsports page at www.facebook.com.