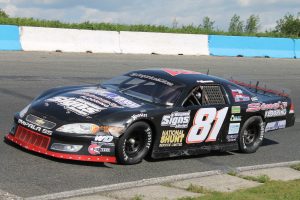 Chasing checkered flags at the local race track, in front of your family members, friends and fans is a lot of fun. During Peterborough Speedway’s 2017 season, few drivers have enjoyed the experience as much as Port Hope, Ontario’s Bryan Mercer. Saturday, July 29th, the 44 year-old second-generation wheelman put another runner-up finish into his back pocket with a strong performance in the track’s Organics & Glass Late Model 30 lap feature event.

Faced with the somewhat daunting task of taking the initial green flag from the outside line, Mercer played the waiting game and looked for the chance to get to the bottom groove. Settling into 3rd spot, he found his racing rhythm and turned-in some solid, consistent laps in pursuit of the next position in the running order. Patience has been a key to Bryan Mercer’s success this year and his team is reaping the benefits on and off the track.

“Sure, I’d like to win every race; who wouldn’t,” said Bryan Mercer. “I don’t call it settling, but there is nothing wrong with finishing in the top 5. We’re able to roll the car into the trailer in one piece at the end of the night and the crew can perform routine maintenance, instead of fixing body panels and other crash damage during our time in the shop. It’s a more positive experience for everyone.”

The leaders caught the tail-end of the field with about 7 laps on the board, with the front trio logging some quick laps. With just over a handful of circuits remaining, Mercer saw an opening and managed to wrestle-away the second spot, holding station there until the main event’s checkered flag waved.

“Its been a great season so far and I’m happy to be in the championship hunt with the Late Model division running just 4 regular season events before the end of the year.”

Earlier in the event, Bryan Mercer won the night’s first heat race and finished second in the next round of qualifying.

Bryan Mercer returns to action Saturday, August 12th at Peterborough Speedway. Follow the team behind the scenes and at the track by liking the Mercer Motorsports page at www.facebook.com.