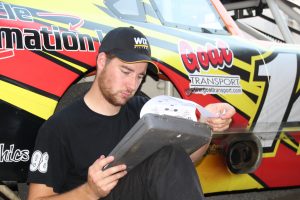 Like a great pair of shoes or your favourite jeans, racecar drivers have certain tracks where they’re more comfortable than others. Brandt Graham feels at home at Peterborough Speedway. The 19 year-old from Orono, Ontario spent a great deal of time during his formative years at the venue known as Canada’s Toughest 3rd of a Mile Paved Oval. From his father’s track championship seasons, to his own Mini Stock racing career and now, as the reigning Lucas Oil Sportsman Cup Series champion, the second-generation speedster always looks forward to the events at the Central Ontario oval.

“Many of the places where we race are about a 3-hour drive away from our home base, so its great to be able to race in my own ‘backyard’,” Brandt Graham said. “I can’t hear the fans while we’re racing, but I know they’re there. I’ll sometimes take a look during a caution flag, but just for a second or 2. You have to stay focused on what’s happening on the race track.”

Heading into the Saturday, August 12th event at Peterborough, Brandt Graham is the Lucas Oil Sportsman Cup Series point leader. The talented teenager – who recently graduated from Durham College and now works as a millwright at OPG, Darlington – had a 3-race winning streak – including capturing the ‘Boss of the Beach Bonus’ at Sauble Speedway – that led to his 2016 title. One of those checkered flags came at the tight, tricky bullring on Mount Pleasant Road, west of the Liftlock City.

“It’s a track that certainly keeps you on your toes,” admitted the young hot shoe. “You’re always working hard to get that next position, without a lot of time to relax. It takes a good car to get to the winner’s circle and I’m hoping we’ll be able to score another checkered flag.”

The Saturday, August 12th Lucas Oil Sportsman Cup Series event at Peterborough Speedway will also include the home track 4Fun, Mini Stock and Late Model divisions; as well as the Ontario Pro Challenge Series. Pit gates will open at 2:00, with spectator grandstands unlocked at 5:00 and racing getting underway at 6:00.