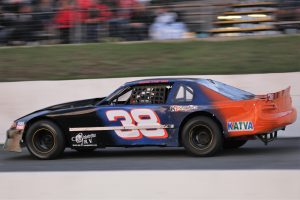 A new car. A new attitude. A new season. Brandon Feeney is spreading the ‘news’.

After finishing 10th in his inaugural year of competition in Peterborough Speedway’s recently rebranded Super Stock division and serving as crew chief and coach for his father’s first foray in stock car racing – an 11th place effort in the newly renamed Bone Stock class – in 2017, 28-year-old auto mechanic from Orono, Ontario is pumped-up about getting back to the track and says he can’t wait for the opening green flag of a brand-new campaign.

“I struggled a bit at the start of the year, but eventually figured things out,” Brandon Feeney said. “After 3 years of turning laps in the Sunfire, it took me a while to get used to the bigger, heavier car. Some of the other teams at the track; along with Dan Price, John Baker Jr. and Brock Baker, Craig and Brandt Graham and the Wills Racing crew all pitched-in to help with set-up information and answer some of my questions. It was good to put together some solid runs before the end of the year.”

Heading into the new season, Feeney will again be running a car that is new to him. During the winter, he acquired a machine that he worked-on during the off-season to get it ready for the opening night. The driver says it was good to have the car – with a Chevrolet Monte Carlo body – ready for action at Sunset Speedway prior to Peterborough’s opening night to shake-down the chassis and build some new set-up information on the car’s handling traits and characteristics.

“We’re trying some things with this car that we had in mind for last year, but didn’t have the time,” Brandon Feeney said. “Our notebook had a lot of empty pages when we first got this new program started, but it has been filling-up nicely as we’ve made changes to the chassis to make it our own. I’m confident that we can pick-up in the new season where we left-off in 2017. This team has a positive attitude and never stops working toward making things better.”

Brandon Feeney is a proud supporter of Make-A-Wish Canada. Follow the team at the track and behind the scenes throughout the year by liking the b-feemotorsports38 page at www.facebook.com.