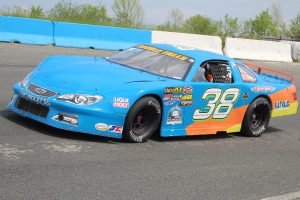 Over the years, the fan base at Peterborough Speedway has become quite familiar with Brandon Feeney. The 29-year-old racer from Orono, Ontario has spent time at the controls of a Bone Stock, Super Stock and is now in his second full season of action in the headline Late Model division. A hardworking auto mechanic when he isn’t spending time at the track, Feeney has become well-known for doing more with less in his quest for the front of the pack. He might not have the same funding as some of the other teams, but the driver of the #38 machine is still enjoying a solid 2019 season.

“Racing at this level is all about having fun and I can’t remember when I’ve had a better time at the track,” Brandon Feeney said. “I’ve been able to run with the leaders all year and add some strong finishes to my resume. Maybe there’s a feature event win in the team’s future; I don’t know. Right now, it feels great to be one of the cars in contention to make it to victory lane.”

Feeney says that compared to some of the equipment the team had employed in the past – which actually had more experience than the driver – this year’s Late Model chassis is a relatively new MRE piece that Connor James used in 2018. It was acquired during the off-season from Ontario Legends Series racer Kevin Foisy, who had the winning ticket when the car was auctioned-off.

“We bought the original Bone Stock car in 2014, ran it for a couple of years and then handed-it down to my father to race,” the driver said. “The Super Stock and Late Model that I used in 2018 had been around quite a while and had a ton of laps on them. They were great rides to help me gain some additional track time and experience. It also males it easier to appreciate the car we’ve been running this year.”

Heading into the final dates of the regular season at the tight, tricky bullring on Mount Pleasant Road, Brandon Feeney sits 3rd in the Late Model point standings. No stranger to hard work, Feeney doesn’t have a garage or a shop and does most of the work on his equipment in a dirt driveway at his house, or inside the trailer with the help of his girlfriend Bree Froude and friend Mike Nelson.

“I’ve been lucky to be around a group of other racers who pitch-in and help on my stuff when they’re not running their own,” Feeney said. “John Baker Jr. and his son Brock, Dan Price and Chris Mitchell are always happy to get their hands dirty at my house or at the racetrack”.