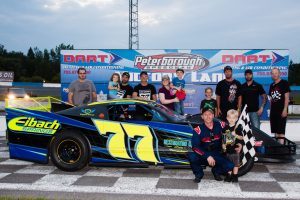 From the first green flag of the season, the Ontario Modifieds Racing Series – powered by Torque Builders Inc. – has earned its place in the provincial motorsports record books. In the first 5 event on this year’s schedule, a handful of drivers scored the first career feature race win. That changed Saturday, July 15th when Mark Gordon became the first repeat winner and Saturday, July 22nd, Brad Stevenson picked-up his second win of 2017 and the second of his career during a series stop at Peterborough Speedway.

Randy Hollingsworth and Duane Cinnamon brought the field of 14 starters to the green flag for the 25 lap ‘A’ main. From his outside front row position, Cinnamon rolled out to a strong advantage over former champion Rob Warnes, who slipped into the runner-up spot. There has long been a saying in racing that a car will run its best laps just before a mechanical failure and that adage proved itself to be true on the 6th lap, when Warnes slammed the 3rd turn retaining wall, leaving a trail of fluids in his wake. The wreck also collected Connor James. Each driver was shaken-up as a result of the incident, but otherwise unhurt.

Cinnamon continued to lead after the restart and looked to be on the way to his second win. The driver of the #41 machine caught-up to the tail end of the field and began working around slower cars with 20 laps on the scoreboard. Just a couple of laps later, his fortunes changed as Brad Stevenson worked his way into the lead, bringing reigning series champion John Baker Jr. into second position. That’s the way things would end, with Cinnamon hanging on for 3rd ahead of Stu Robinson Jr. and Mark Gordon. Hollingsworth, Rick Warnes, Ryan Dick, Josh Gruntz, Chris Burrows, Craig Stevenson, Willow Barberstock, Connor James and Rob Warnes rounded-out the finishing order.

Ontario Modifieds Racing Series notebook: Qualifying heats went to Brad Stevenson, Rick Warnes, Stu Robinson Jr. and John Baker Jr…Former series regulars Ryan Dick and Josh Gruntz each made their first starts of the year on the tour. Gruntz – whose brother Ben has been running in the 4Fun division at Peterborough Speedway – arrived at the track after qualifying had been completed and started the main event at the back of the pack…The series returns to action Saturday, August 5th at Flamboro Speedway.