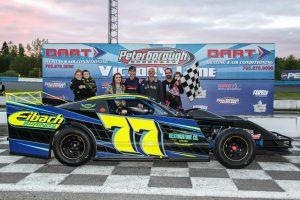 The Ontario Modifieds Racing Series – powered by Torque Builders Inc. – rolled into Canada’s Toughest 3rd of a Mile Paved Oval – Saturday, May 27th – for the first time in 2017 and joined the 50th Anniversary Season celebration at Peterborough Speedway.

Nearly a dozen teams from the popular open-wheeled racing tour signed-in to tackle the tight, tricky bullring on Mount Pleasant Road, west of the Liftlock City and the night’s 20 lap main event rolled to the green flag with the father and son duo of Rick and Rob Warnes on the front row. The pair showed the pack the quick way around during the early stages of the event, but they were no match for Brad Stevenson.

The driver of the S & S Racing ride wheeled his ultra-sharp #77 machine from outside of the second row and took command of the headline dance with just 5 circuits showing on the lap counter. A yellow flag at the halfway mark slowed the pace, but did nothing to derail Stevenson’s trip to the winner’s circle. On the restart, he’d move-out to an advantage of nearly 5 car lengths as he watched the laps click away from the front of the field.

Rob Warnes chased Stevenson across the stripe, with his father close behind. Duane Cinnamon – who won the opening round, a week earlier at Sunset Speedway – was 4th, with Randy Hollingsworth completing the top 5. Mark Gordon, Connor James, Chris Burrows, Craig Stevenson and Willow Barberstock rounded-out the running order.

Ontario Modifieds Racing Series Peterborough Speedway Notebook: For the second straight show, reigning series champion John Baker Jr. was forced to watch the action from the sidelines, as his #63 machine developed problems during the pre-race practice session. As is usually the case, the driver said the car was “running great” just before the issues cropped-up…The series returns to Peterborough Speedway Saturday, June 10th. Before the race event, OMRS will host its annual ‘Test a Mod’ day from 11:00 until 2:00.