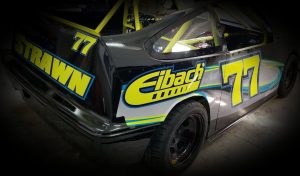 He came. He raced. He conquered.

“With 4 years of racing in the Bone Stock ranks under my belt, I’d already been entertaining thoughts of moving on. Winning last year’s track championship just gave me an extra nudge,” said Corey Strawn. “It’s a new division, but the stage is still the same. Only some of the players will be different. I’m looking forward to getting the season underway and can’t wait for the first laps of the year to see if we can pick-up where we left-off in 2019.”

“We definitely did our homework when putting this piece together,” admitted Corey Strawn, who works as a warehouse/service repair supervisor. “Year after year, the top teams in this class have taken their programs to the next level and we’ll have to meet or exceed what they’ve been doing if we expect to be competitive. There’s nothing quite like the rush you get every time you’re behind the wheel. Even if its just for a few minutes, it’s the only time you aren’t thinking about anything except beating the other cars on the track.”

The driver says his wife Rho Clarry-Strawn is an excellent cheerleader and has been very supportive of his racing endeavours and even works on the car when she’s free. He’s also very thankful for the assistance he’s received from his father Brian Strawn, brother Chad Strawn, Glen Morris, Paul Kuleba and Michael Kotsopoulos throughout the different stages of his career.

To keep in touch with Corey Strawn’s progress during his first season of action in the Peterborough Speedway Mini Stock division, join the S&S Racing #77 Facebook group.