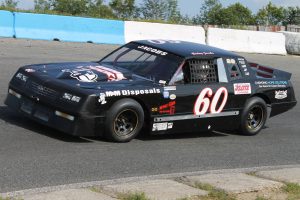 Fielding a competitive race team – even at the weekly short-track level – takes a solid commitment of both time and effort. The #60 Thunder Car program of Jacobs Motorsports is one of the most dedicated operations in the pit area at Peterborough Speedway.

During the 2017 season, the Thunder Car division was part of 12 shows during the 16 events at Canada’s Toughest 3rd of a Mile Paved Oval. On the strength of a pair of main event victories – including a dominating performance in a 50-lap feature to mark the venue’s first 5 decades of operation – as well as a number of top 5 and top 10 performances, 20 year-old Bailey Jacobs finished the final point standings in second position for the second year in a row. The talented youngster from Warsaw, Ontario says his success was a total team effort.

“We were constantly changing things on the car to make it better and faster,” Bailey Jacobs, the 2015 Thunder Car rookie of the year said. “Our notebook is full of different ideas. Some of them worked, while others didn’t. It was rare that the car came to the track with the same set-up for 2 shows in a row. We worked on things during the pre-race practice sessions and during the week at the shop. Hard work is the key that opens the door to the winner’s circle.”

The car they ran during the recently concluded Peterborough Speedway schedule was new to the team and just getting to the track for the Saturday, May 20th season opener was an arduous task. Crew members were busy almost around the clock and it wasn’t until around noon the day of the first event that the #60 bunch knew they’d be in the starting line-up.

“There was talk about coming to the track, running a couple laps at the back of the pack and going home,” admitted Jeff Jacobs, the driver’s father. “Tyler Handley, Luke Handley and Jay Peacock did a great job making sure we were ready to start the year off right. The total commitment from everyone involved is what makes this car a contender, week-after-week.”