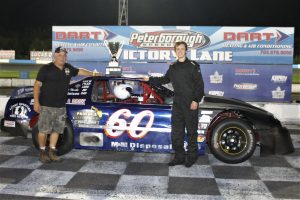 Weekly racing success is all about a driver’s statistics. When everything is said and done, it’s the number of race wins, top 10 and top 5 finishes that makes everyone sit-up and take notice. After posting some impressive results early in his career – including a pair of runner-up point finishes during the 2016 and 2017 schedules – Warsaw, Ontario’s Bailey Jacobs was ready to take the next step in his Peterborough Speedway Super Stock efforts. Although he was far too humble to admit it, the soft-spoken former go-karter felt the 2018 campaign could be his breakthrough season.

With one of the hardest working, most dedicated crews in the pit area working to prepare and maintain his equipment from week-to-week, Jacobs kept his focus starting with the year’s first green flag. The 21-year-old graduate of the Heavy Equipment Mechanic program at Fleming College thought it was always better to put pressure on the other drivers in the field than to feel it himself.

“This is my 4th year of stock car racing and my confidence has grown season after season,” admitted Bailey Jacobs. “I know what it takes to get to the front of the pack and when I should wait until something develops that will allow me to get there without tearing-up the car.”

On the strength of back-to-back late season feature wins, the hard-charging youngster held a slim 14 point lead in the Super Stock standings heading into the Saturday, September 1st Championship Clash. Those consecutive victories meant Jacobs couldn’t start any higher than 10th in the season finale. With his title rival taking the green flag from the front row, the driver of the #60 machine knew what he’d have to do and where he’d need to finish to clinch the crown.

“I tried to pick-off a couple of spots early and then settled-in to a rhythm during the race,” said Jacobs. “We only had 20 laps to work with, but I had a good feeling about how things were going to wind-up.”

Bailey Jacobs was able to claim his first career Peterborough Speedway Super Stock track championship with a 6th place main event finish. He and his team celebrated the victory with close to 50 family members, friends, fans and sponsors. A day later, he reflected on the moment with a post on his Facebook page.

“I can’t say enough about this whole team. My crew spent countless late nights every week getting this car ready for the next race and it was a rocket ship to drive,” Jacobs said. “In every race, we’d learn more about the car and how to tune it. It was unreal to celebrate the championship with so many people in victory lane. It makes all the hard work worth it.”