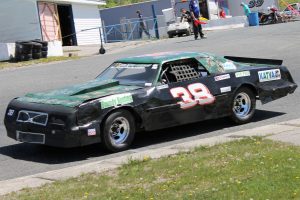 Whether a driver is taking their first ever laps behind the wheel, or making the switch to a different racing division, achieving a certain level of success is the common goal. For the 50th Anniversary Season at Peterborough Speedway, Brandon Feeney and his father Mike will each be looking to capture the rookie of the year award in their respective classes.

After recording a 7th place finish during the 2016 campaign, the 27 year-old auto mechanic made the choice to take a step away from the track’s 4Fun field and will try his hand in the Thunder Car ranks. The familiar #38 Chevy Cavalier he’d campaigned won’t be sitting idle, as his 60 year-old father – who has a number of demolition derby competitions on his resume – takes his first laps in a stock car with the popular Central Ontario oval’s entry level division.

“I’m hoping for a good season with my new car. Even though we won’t be competing against each other, both machines will carry a similar camouflage paint scheme and I know my Dad will have some fun out there,” Brandon Feeney said. “He’s supported my racing since I got started in 2014 and it will be great to help him through his first season of weekly action at Peterborough.”

Brandon Feeney purchased one of the most famous cars to ever race at the venue known as Canada’s Toughest 3rd of a Mile Paved Oval when he acquired ‘The Bus’ from the Crowe Brothers Racing Stable at the end of the 2016 season. While the car will have a different look and carry Feeney’s traditional #38, the piece can almost find its own way around the track. The easy-going racer says he’s hoping for the best, but doesn’t feel like there is any pressure to perform.

“Howie Crowe is a great guy and I’m sure if I have a question, he’ll be happy to offer some assistance,” Feeney said. “The best part about racing at this level is that no matter how determined we are to beat one-another when the green flag waves, we’re all usually pretty good friends and happy to help each other get the most from our equipment.”

Fans can follow the lad and his Dad throughout Peterborough Speedway’s 50th Anniversary Season by liking the B-Fee Motorsports 38 page at www.facebook.com.