A main event win at Peterborough Speedway’s Super Bowl of Stock Car Racing is the goal of every racer who signs-in at the pit gate for the Autumn Colours Classic. Sunday, October 9th saw 8 different divisions tackle Canada’s Toughest 3rd of a Mile Paved Oval for bragging rights in the season-ending spectacular.

2016 track champion Rick Spencer-Walt and Paul Maltese brought the Earl Ireland Auto Sales Late Model pack to the line for a 75 lapper to kick-off the day’s action. Spencer-Walt was in control of the field from the drop of the green flag and even with some aggressive racing in his rear-view mirror, he survived a number of yellow flags and a red, when veteran Tom Walters – who was making the last stop in his ‘Final Ride’ tour – got upside down heading into the first turn. During the day’s final caution period, the leader brought his #31 car to the pits to change a tire. That gave the lead to Gord Shepherd, who held on for the win. Taylor Holdaway, Matt Bentley, Cayden Lapcevich and Todd Delisle finished-out the top 5. Results are unofficial, pending technical inspection and a scoring review.

The Battlefield Equipment Rental 4Fun teams were next to roll from the staging area, with 40 laps on the agenda. On the strength 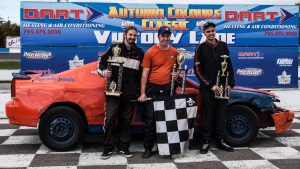 of their Chase for the Colours runs, Phil Givens and Ryan Oosterholt paced the field to the line, with a lap 3 yellow flag slowing the run. Former Autumn Colours champ Griffin Powell took the lead on the restart and was catching slower traffic with 10 laps on the Pennzoil scoreboard. With nearly a half track’s advantage, Powell took the victory, with 2016 track champion Jeremy Kelly, Oosterholt, Jake Kelly and Brad Stevenson rounding-out the top 5. 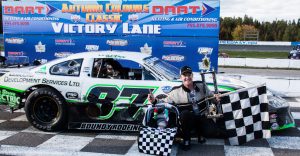 The 116 lap Pro Late Model feature was easily the longest of the day’s main event. Shawn Chenoweth and Billy Schwartzenburg brought the pack to the green and even though Chenoweth continued his domination of the division early, it was a pair of familiar faces that had the crowd pumped-up. Willie Reyns – who had started 7th – was moving through the pack and took the lead as the lap counter showed 54 complete. Dan McHattie – who was 14th when the field hit top speed – was 4th by lap 51, but his day came to an end less than 10 laps later during a lap 59 yellow flag. Reyns moved-out to a comfortable lead, but Chenoweth looked to be taking care of his equipment, while holding the runner-up spot as Reyns hit his marks lap after lap. With his 6 week-old daughter at her first ever race, the Thunder Car graduate scored the biggest win of his career. Chenoweth, Mat Box, Andrew Gresel and Andy Kamrath completed the top 5. 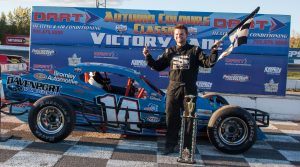 throughout the field, the OSCAAR Modifieds hit the track for a 50 lap headline dance. After an early yellow flag, Gary McLean – the winningest driver in series history – took the lead. As he has done so many times before, McLean was the class of the field and started to lap backmarkers with 22 circuits complete. The air left the balloon when the #8 machine drifted to a stop on the high-side of the first turn on lap 39, with what would be diagnosed as a faulty ball-joint. A level of attrition allowed the multi-time champion to return to the event, but he wouldn’t contend for the win. A.J. Emms took the checkered flag over former OMRS champion Rob Warnes, Brent McLean, John Harper and John Baker Jr. who made-up the top 5.

50 laps would settle the score as Matt Bentley and Dan Archibald brought the 30 Paul Davis Systems Thunder Car teams to the Great Canadian RV green flag. A yellow flag with just 5 laps on the board would bunch the running order, but Bentley was still in control. There was aggressive racing all through the field, the frontrunners seemed oblivious to everything that was going-on behind them. With just a few laps remaining, Jordan Howse would get around Bentley and take the lead. Howse, Ryan Semple, Miles Tyson, Joe Adams and Brandon McFerren were credited for the top 5, although the finishing order was subject to review due to a driver protest and technical inspection. 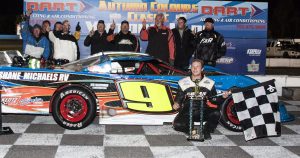 would not only find another Autumn Colours Classic winner, but crown the tour’s 2016 champion. Tiemersma would show his strength with move to the front from the outside line; a position he’d hold until Brandon Watson took the lead on lap 22. A number of yellow flags and some over-the-top racing was happening in his rear-view mirror, but Watson – in a rare series start – took the win, with John Cadman Jr., J.R. Fitzpatrick, Gord Shepherd and Glenn Watson completing the top 5. Fitzpatrick’s 3rd place effort was enough to clinch the overall title. 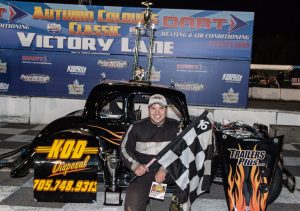 There was a family reunion in the Trailers Plus INEX Ontario Legends feature, with multi-time series champion Nicholas Ledson and his brother Cole on the front row for the 45 lap main event. As the leaders caught the tail-end of the field just 7 laps into the run, championship contenders Cole Ledson and Matt Haufe were fighting for position. Ledson took the lead after a lap 19 yellow, with Haufe getting control as the lap counter showed 37 down. He’d survive a late-race caution to take the race win and the 2016 series championship. Adam Cuthbertson’s return to the series produced a 2nd place finish, but the #79 machine failed post-race inspection. Cole Ledson was credited with the spot, with Terry McClelland, Cole McFadden and Mack DeMan – in Jamie Riberdy’s #6 – following the leaders across the stripe.

A 50 lap shootout for the Jiffy Lube Mini Stocks brought the 2016 Autumn Colours Classic to a close, as Brandon Hannah and Johnny Paradzinski brought the field to the starting line. Former Autumn Colours champion Andy Kamrath moved-into the top spot on the 4th lap and was working his way through slower traffic just 3 circuits later. Warren Paxton took a turn at the front on lap 28, but Kamrath had worked around him when a hard wreck on the front stretch involving Hannah and Nick Clarke brought proceedings to a halt. Hannah’s car was destroyed, but the driver was unhurt. Kamrath survived a pair of late yellows for the win, with Paxton, Chris Allard, Kris Khan and Casey Cavanaugh rounding out the top 5.

Bullring bullet points: A near capacity crowd meant a huge 50/50 payday. Derek Buttery of Peterborough walked away with nearly $1400 from his experience at the Autumn Colours Classic…The stock car portion of the track’s 2016 schedule may be finished, but the track will host a show of snowmobile and ATV radar runs and grass drags – presented by Lucas Oil Products – Sunday, October 16th starting at 12:30.