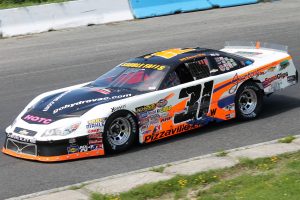 No matter where they might have spent the 2017 regular season, there isn’t a racer anywhere in the province who wouldn’t love to add an Autumn Colours Classic championship to their resume. Ontario’s premier auto racing event celebrates its 25th anniversary – October 6th, 7th and 8th – at Peterborough Speedway.

From green flag to checkered, this is the motorsports experience that packs the pits and fills the grandstands at Canada’s Toughest 3rd of a Mile Paved Oval. Track champions, seasoned veterans and raw rookies alike from north, south, east and west will converge on the popular Central Ontario venue, in search of one of the most coveted prizes in the sport. Over the 3 days of action, fans will see close to 10 divisions and nearly 120 drivers tackle the track.

After their performance at the Chase for the Colours Qualifier – Sunday, July 2nd – Griffin Powell, Kris Khan and Anthony DiBello will start from the inside of the front row in the Battlefield Equipment Rental 4Fun, Jiffy Lube Mini Stock and Thunder Car feature events respectively. 2016 track champion Rick Spencer-Walt will roll from the pole in the 75 lap Organics & Glass Late Model ‘A’ main.

“This could be one of the biggest post seasons we’ve ever had,” said Peterborough Speedway owner/promoter J.P. Josiasse. “2017 is the track’s 50th

Anniversary and this is the 25th year for the Autumn Colours Classic. Winning the title will come with a little extra spark this year than it ever has before.”

The 3-day fall festival of speed at the tight, tricky bullring on Mount Pleasant Road, west of the Liftlock City gets rolling Friday, October 6th.  Things start-off with pre-event technical inspection and practice sessions, followed by the first round of qualifying for the Battlefield Equipment Rental 4Fun, Jiffy Lube Mini Stock, Thunder Car, Organics & Glass Late Model, Pro Late Model and OSCAAR Modified divisions. Also on the docket will be Young Guns Races for Mini Stock and Thunder Car teams, presented by APC Auto Parts. Pit Gates will open at 10:00, with general admission spectator grandstands unlocked at 5:00 and the first heat race heading to the line at 6:00.

Full details on the 25th Annual Autumn Colours Classic – presented by Lucas Oil Products – can be found by selecting the ‘Autumn Colours’ tab at www.peterboroughspeedway.com. Fans can also check the Peterborough Speedway page at www.facebook.com, or follow the track on Twitter. There is also a free app available for Smartphone users.