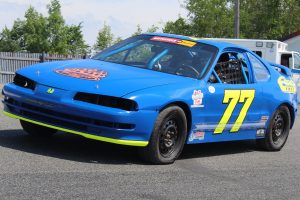 It seems like this year’s schedule at Canada’s Toughest 3rd of a Mile Paved Oval got underway just a couple of weeks ago, but with only 2 shows remaining in the regular season, teams in Peterborough Speedway’s Saturday night classes will be pulling-out all the stops to gain any possible advantage in the championship fight.

Everywhere you look, there are tight point battles as action heads gets closer to the Saturday, August 31st Championship Clash. Unofficially, there is less than a 50 point margin between Corey Strawn, Chris Tubman and Sean Kennedy in the Bone Stock title fight. Ironically, Strawn – who leads the standings – has yet to win a main event. On the subject of wins, Tim Burke’s checkered flag last weekend has turned the Super Stock battle into a real dog-fight between himself, Mark Gordon, Howie Crowe and Marlie Owen. Former Bone Stock champion Jeremy Kelly looks to be the heir apparent to the 2019 Mini Stock crown, but rivals Nolan Gould and Ember Junkin – an early season feature winner – could have something to say about the outcome.

With a win in the recent 50 lap feature Cavan, Ontario’s Dan McHattie looks to have all but clinched another Late Model championship, while the #26 Renegade Truck – shared by drivers Brad Lavalle and Nicholas Ledson – is the front runner in the pick-up parade. Track owner and promoter J.P. Josiasse says it’s a good time to be a fan at Peterborough Speedway.

“Our teams are always committed to giving our supporters the best show possible, but the championship battles will kick the level of excitement up a notch,” Josiasse said. “Every lap and just a single position in the running order could make a big difference.”

Head to www.peterboroughspeedway.com or the track’s Facebook and Twitter social media platforms for the latest news and complete schedule and point standing updates. Search for Peterborough Speedway wherever you find your smartphone apps and you’ll be able to keep in touch with everything going on at the tight, tricky bullring on Mount Pleasant Road whenever you want.