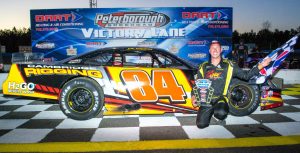 For the first time since their appearance during the 2018 season, the APC Pro Late Model Series was back to deliver a headline-worthy performance – Saturday, June 18th – at Canada’s Toughest 3rd Mile Oval.

kick-off the 100 lap main event. Early in the running, Sheridan threw everything he could think of at Kimball in an attempt to steal the lead, but the former Peterborough Speedway track champion and multi-time Autumn Colours winner held onto the top spot.

Just as their Qwick Wick Fire Starter Super Stock cousins had done earlier in the night, the race had a long string of green flag laps before the yellow waved with 28 circuits complete. From the restart, all eyes were on JR Fitzpatrick, who was a man on a mission. Coming from the 8th starting spot, Fitzpatrick took the lead as the pack showed 59 laps on the board. Other than briefly surrendering the position to Sheridan, the No. 84 machine was in total control and grabbed his second straight win on the tour. Andrew Gresel, Sheridan, Rick Spencer-Walt, Josh Stade and Kyle Steckly completed the top 5.

Also on the night’s agenda was a 50 lap ‘A’ main for the Qwick Wick Fire Starter Super Stock Tour. After running the majority of the race distance caution-free, a pair of late race yellow flags led to a dramatic change in the outcome, as Jason Parker took the win over polesitter Shawn Chenoweth on a green, white checkered finish. Lane Zardo, defending race winner Carson Nagy and Pete Vanderwyst completed the top 5. The full race story can be found at www.apcracingseries.com. 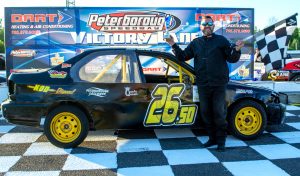 Finnegan also had a pair of qualifying event wins, with the others going to Brad Lavalle and Angelo Novis.

All event finishes are unofficial and subject to scoring review, as well as post-race technical and safety inspection.

Bullring bullet points: Randall Patterson of Oshawa claimed the 50/50 winner’s share of just less than $925.00…In a moving trackside moment with a final lap around the track, Rick Spencer-Walt paid tribute to the memory of provincial motorsports photographer Dan Little Jr. who had passed away earlier in the week…Other than contact with the 4th turn wall that sidelined the No. 38 Renegade Truck of Michael Feeney, the night’s program – which is currently available on the G-Force-TV You Tube channel – was largely incident free and completed in under 4 hours.

Peterborough Speedway staff would like to thank the team at KOD Disposal for their help to get the facility prepped and painted for the live broadcast on G-Force-TV. A long-time track sponsor, KOD Disposal also tripled the regular purse payout for the hometown Bone Stock field. For your deck, fence, interlocking stone, roll-off bin rentals and seasonal property management services call 705.931.5637 or like www.facebook.com/KOD-Disposal.