A 15 lap feature for the Hurricane Midgets was the first of the ‘A’ main events to take to the track, with 24 starters answering the bell. With 3 laps complete, the entire field was sent scrambling when a chain reaction mishap blocked the front stretch. After the red flag clean-up, the starting field was reduced to 14 runners, with Jamie Bound in the top spot. The driver of the #83 wouldn’t give up the spot, with Mike Bradley, Richard Woodland, Brad Holmes and Brian Woodland completing the top 5. 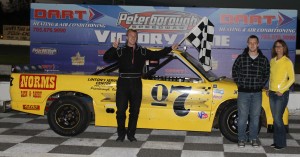 The Parry Spring Service Renegade Truck division was set for 14 circuits on Canada’s Toughest 3rd of a Mile Paved oval, with the father and daughter team of Stephen and Stacey Bierworth on the front row. Last week’s main event winner Jack Dallin grabbed the lead with just 2 laps on the clock and never let go. Stephen Bierworth would hang on for second, with Bill O’Hara, Jeff Vanderbelt and Stacey Bierworth – who recovered from last week’s explosion and fire – 3rd, 4th and 5th.

Anthony DiBello and Howie Crowe paced the Paul Davis Systems Thunder Car field to the green with 20 laps on the plate. DiBello and Crowe broke away early, with Donny Beatty a couple of car lengths back in 3rd. With 12 laps complete, Crowe tried to muscle around the inside of DiBello heading into the 3rd turn, but cut a right front tire in the process and brought out a yellow flag. The lap counter showed 17 complete, when Dan Price and Beatty came together in the 2nd turn and both cars spun. With the new “Gentlemen’s Rule” getting its first test, Price accepted responsibility for the incident and dropped to the rear, with Beatty getting his second place position back for the restart. Anthony DiBello picked-up the win. Beatty, Fidelle DiBello, Crowe and Andrew Swindells were the fast 5.

A dozen Peterborough Hyundai Mini Stocks left the staging area, with Henk Mulders and Donovan Price occupying the front row. Price dropped through the field, while Tyler Junkin was a man on a mission and mirrored the leader’s every move, but Henk Mulders led all the way earning a trip to Dart Heating and Air Conditioning Victory Lane. Junkin was the runner-up, with defending track champion Ryan Oosterholt 3rd. The trio was followed across the stripe by Ryan Babin and Brandt Graham.

Wheeling a car he said wasn’t even close to being ready, Bryan Mercer and Craig Graham paced the Earl Ireland Auto Sales Late Model field to the green for a 25 lap dance. The front row starters kept the field in check until 17 laps were complete. As the pace slowed for an issue involving Jack Horner, contact sent Graham hard into the 3rd turn retaining wall with a driver’s side impact. The car was too damaged to continue and needed to be cradled off the track. Things continued to brew in his rear-view mirror, but Mercer held off all challengers. Kimball finished one spot short of his second consecutive win, but fought back a late race attack from Mitchell. Adam Cuthbertson and Craig Parry completed the top 5.

Bullring Bullet Points: The Peterborough Shrine Club’s 50/50 draw paid $387 to the winner…Bryan Mercer dedicated his Late Model feature win to the memory of his cousin and spotter Shane Crombie. He was also able to celebrate in Dart Heating and Air Conditioning Victory Lane with his father, Ron, who was hospitalized late in 2013…For the second consecutive week, mechanical gremlins plagued the #54 Mini Stock of Danny Benedict. Their Mustang suffered issues in practice and didn’t make the grid for qualifying or the main event…Saturday, May 31st Peterborough Speedway will host the first of this year’s Fan Appreciation-Toonie Admission Nights, presented by Pepsi. Racing will include the Battlefield Equipment Rental 4Fun, Paul Davis Systems Thunder Cars, Earl Ireland Auto Sales Late Models and the Ontario Legends. Spectator grandstand admission is just $2.00, with an on-track autograph session at intermission. The night’s schedule has been revised to accommodate the huge crowd expected. Pit gates will open at 2:00, grandstands at 4:00 and the first green flag waves at 5:00.

Fans can always find the latest news at www.peterboroughspeedway.com or following the track on Facebook or Twitter. You can also download the free Peterborough Speedway app on your Smartphone.