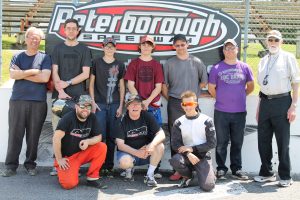 As part of its driver development program, the Ontario Modifieds Racing Series – powered by Torque Builders Inc. – hosted its annual open test session prior to the regularly scheduled race night – Saturday, June 10th – at Peterborough Speedway. Rick Warnes – who along with Bill Pickford and Randy Hollingsworth make-up the team of OMRS officials – says it’s a great opportunity for racers from other divisions to get the feel for one of the powerful machines.

“Over the years, we’ve had a few drivers who have acquired a chassis to run with our series. That’s been the goal all along,” Warnes explained. “Its almost like a motorsports version of ‘Field of Dreams’. We have the cars and drivers with enough experience to make it a benefit for everyone involved. Even if it opens the door to just one driver a year, we’ve accomplished our goal.”

Using the #95 machine of former series champion Rob Warnes as the rabbit, a pack of hungry hounds from a variety of different genre strapped-in behind the controls of an OMRS machine for a few laps, followed by a debriefing session with family, friends and tour officials. Rick Warnes says that as in years past, around 10 drivers took the opportunity to hit the track. Its been a stepping stone for runners like Willow Barberstock and Connor James, who currently run full-time with modifieds tour.

“Willow and Connor moved into our program shortly after one of the sessions,” Warnes said. “Brandon Feeney – who this year switched from the 4Fun division to the Thunder Car class – also participated in the practice day and looked at running with OMRS full-time, before picking-up the new car. Colborne, Ontario’s Linc Brown ran some laps last year and made his debut with the series Saturday, June 10th.”

Ontario Modifieds Racing Series ‘Test-a-Mod’ Notebook: Some of the drivers on the track at this year’s practice included Nathan Brooks, Owen Brooks, Austin Brown, Alex Cazzilla, Andrew Druzdzowski and Patrick Ripley. Mark Griffin, who runs with the Eastern Ontario Legends Series and makes selected starts with the 4Fun division at Peterborough. 4Fun regular Sean Kennedy was on hand for the test and followed-up his time in the Modified with a feature win in his own car. Graham Brown also ran some laps. It was his first time behind the wheel of an open-wheeled machine in more than 15 years.