The forecast calling for a great night of racing was right on the money as the Ontario Sportsman Series joined the home track Bone Stock, Mini Stock, Super Stock and Late Model teams – Saturday, July 16th – at Peterborough Speedway. 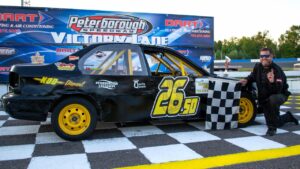 Battlefield Equipment Rental Bone Stock runners were the first to roll from the staging area for a 20 lap feature tilt, with Steve Finnegan and Sean Kennedy on the front row. From the drop of the green flag it was a 3-car battle for the lead, with Tegan Stanley bringing his dog into the fight while Jake Kelly and Kyle Novis challenged each other to see who’d take over the 4th spot. The race’s only caution turned into a red flag, when Angelo Novis had an engine expire, resulting in a lengthy spill clean-up in the 2nd turn. Back under green, Finnegan held on for the win over Kennedy and Stanley. Kyle Novis was 4th with Brad Lavalle 5th. 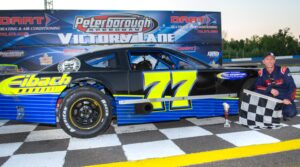 Stevenson took over the position on the race’s 2nd lap, with Marlie Owen sliding into 2nd. Mark Gordon moved into the runner-up spot on the restart following a yellow flag at the halfway mark, with last week’s feature winner Bailey Jacobs taking 3rd. Stevenson led the charge to the checkered flag, over Gordon and Jacobs. Owen and Jeremy Dobb rounded-out the top 5 finishers.

Bobby Cousineau and Jacob Mercer brought the home track Late Model pack to the line for their 25 lap main event. 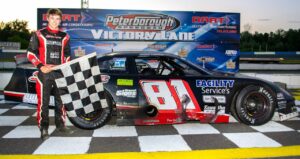 Mercer got the jump on Cousineau from his starting spot in the outside of the front row. The youngster at the controls of the No. 81 machine has been quick off the trailer every week and had built-up a solid advantage by the time the first caution flag waved. Even on the restart, Mercer kept control of the field and held back challengers after a late race yellow to take his first career win. Tim Batty, James Townsend, Cousineau and Doug Wills completed the top 5.

20 laps would be the issue as the Jiffy Lube Mini Stock field came to the stripe with Brock Baker and Chris Tubman on the front row. Like Mercer, Tubman took the 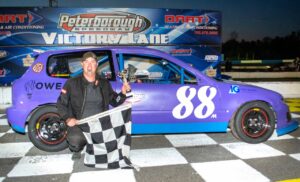 lead from the outside line and the No. 88 ride was strong throughout the race distance. The frontrunners caught the tail end of the field with 8 laps complete and the race ran green until a lap 13 yellow flag. Former track champion Jeremy Kelly got close to Tubman on the restart but couldn’t get around the leader. Shawn Solomon, Baker and Ember Junkin followed the lead duo across the line.

It was an Ontario Sportsman Series trifecta for Kevin Trevellin, who set fast time in qualifying, started on the provisional 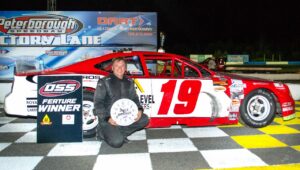 pole and led every lap of the AF100, to record his first career main event win. Mark Patrick, Doug Cathcart, Chad McGlynn and Bradley Robinson completed the top 5. Full event details can be found at www.ontariosportsmanseries.ca.

All finishing positions are unofficial and subject to scoring review and post-race safety and technical inspection.

Bullring bullet points: Austin James Nelson of Bowmanville, Ontario enjoyed some great racing and went home with an extra $451.00 in the night’s 50/50 draw…Jeffrey Remington made his first start of the season and finished 6th in the Super Stock main event…Adam Sharkey took over the driving duties in Kyle Fetterly’s No. 49 and was 11th at the checkered flag in the Mini Stock feature…The game of Mini Stock musical chairs continued at the Junkin Racing shop. After running his sister Ember’s ride a couple of weeks ago, Tyler Junkin switched-up the numbering on his Mom Marilyn’s car from 61 to 41 and logged a 6th place finish in the feature.

Fans are once again reminded that there is no smoking permitted in the family grandstand sections and cannabis use is forbidden anywhere on the speedway grounds.

Next on the 2022 docket at Peterborough Speedway will be the return of the Ontario Outlaw Super Late Models for a 50 lap ‘A’ main Saturday, July 23rd. Also on the line-up will be the home track Mini Stock, Renegade Truck and Super Stock divisions, plus the Ontario Modifieds Racing Series and the Kingsway Auto Centre Junior Late Models, with Kid’s Rides as the intermission feature. Pit gates will open at 2:30, with spectator grandstands unlocked at 5:00 and racing at 6:00. Tickets can be ordered in advance by using the online purchase option. Passes are also available on raceday at the walk-up, track-side ticket window. On-site purchases are cash only sales.