With temperatures hovering around the 30-degree Celsius mark and the humidex even higher, the Saturday night action was the perfect match for the forecast as Peterborough Speedway rolled another Hot August Night to the starting line.

With a full moon beginning to show its face on the horizon, 17 KOD Disposal Super Stock teams headed for the green flag to kick-off the night’s feature race action with Bobby Cousineau and James Townsend on the front row. Cousineau took the early lead, with fan favourite Marlie Owen moving into the runner-up spot. With the lap counter showing 3 complete, Owen claimed the top spot and was running there when the race’s only yellow flag came out a couple of laps later. During the caution, mechanical issues sent the machines of Mark Gordon and Paul Boundy to the pits, ending the night for both drivers. Owen showed her strength and stayed focused for the balance of the race, scoring her first win of the year. Rob Richards, former track champion Bailey Jacobs, Anthony DiBello and Kyle Gordon completed the top 5. 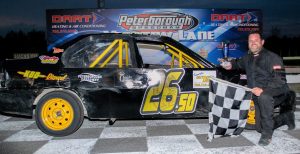 quick shot from his outside front row starting spot, Kennedy took the lead with Steve Finnegan on his back bumper. The pair ran side-by-side with nearly identical laps during the early stages before Finnegan took the lead. A lap 6 caution flag – for an incident in the 2nd turn – slowed the pace, but Finnegan maintained his lead on the restart, with Shawn Solomon moving into 2nd. Lapped traffic came into play with less than a handful of laps remaining but didn’t slow Finnegan’s quest for the win. Solomon, Ryan Oosterholt, Kyle Novis and Kennedy rounded-out the fast 5.

Kris Khan was originally credited with 3rd, but his No. 48 machine failed required post-race inspection and was disqualified.

Solomon had a pair of Bone Stock heat wins, with the others going to Finnegan and Oosterholt. 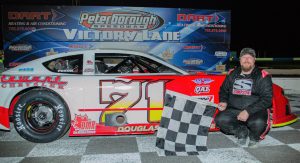 After being sidelined by rare mechanical issues a week earlier, Dan McHattie and Tim Batty were on the front row for the 25-lap Late Model feature. From the drop of the green flag, McHattie – a multi-time track champion – took total control of the field and built-up an advantage of half a track over Batty, while Steve Powell, Bryan Mercer and Robert Cousineau waged their own battle for position. After catching the tail end of the pack with about a dozen laps remaining, McHattie left little doubt of the race’s eventual outcome and took the checkered flag. Batty, Powell, Mercer and Cousineau followed the victor across the line. 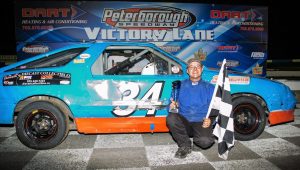 Perhaps motivated by a hard wreck a week ago, Strutt took control early and in just a few laps had developed a lead of about 10 car lengths over Oosterholt. Backmarkers became an issue with just over a handful of laps complete but Strutt was still showing the fast way around. Ember Junkin moved into the runner-up spot on lap 24 and John Lavalle took 3rd with only 5 laps remaining. All anyone could do was watch Strutt, as the race went caution-free and the No. 34 took the win, Junkin, Lavalle, Brock Baker and Oosterholt completed the top 5.

Bullring bullet points: The night’s ‘Share the Wealth’ draw paid $558.50 to Wayne Murray of Peterborough…Mark Gordon did double-duty, wheeling both a Super Stock and Late Model. Brandon Feeney took that one step further, running his own Late Model, along with the No. 53 Mini Stock and Super Stock of Victor Vowles…’The Dentman’ Dave Watchorn hauled from Ottawa to join the Mini Stock field for their 50 lap feature…Jordan Latimer was on-hand with his No. 90 Super Stock…With the 50-lap Mini Stock feature running caution-free, the full night of racing was wrapped-up in just over 3 hours.

Peterborough Speedway will host the Canadian Legend Car Asphalt Nationals Saturday and Sunday, August 28th and 29th. Gates open at 5:00, with racing at 6:00 Saturday night for the home track Jiffy Lube Mini Stock, KOD Disposal Super Stock, Ontario Super Late Model and Trailers Plus Ontario Legends. Sunday afternoon, gates open at 1:00 and racing starts at 2:00. There will be a 50-lap Bone Stock feature, along with Outlaw Midgets, OSCAAR Hot Rods and Ontario Legends. Because of provincial government required contact tracing, advance tickets are required. See www.eventsprout.com/events/peterborough-speedway-2000-ltd to order or use the link on the track website.

Find the latest racing news and see updates on the 2021 schedule, head to www.peterboroughspeedway.com or follow the Peterborough Speedway Facebook, Twitter and Instagram social media platforms. There is also a free app available for Smartphone users.