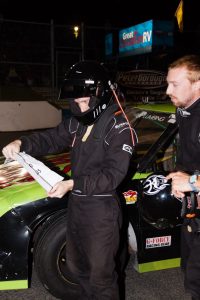 With the 2017 track championships decided, fans at Canada’s Toughest 3rd of a Mile Paved Oval got more bang for their buck – Saturday, September 2nd – as Peterborough Speedway presented the first ever Top 10 Shootouts to wrap-up the 50th Anniversary regular season.

The Organics & Glass Late Models were first, as Amanda Balson – who had won a 30-lap feature earlier in the night – and Terry Clod brought the field to the start. Former track champion and Autumn Colours Classic winner Dan McHattie took the checkered flag that ended the opening 10 lap segment. Faced with a choice between a pair of sealed envelopes, the veteran campaigner from Cavan, Ontario picked one that would double his 3rd place point-fund payout at the season-ending banquet. Then in a blind draw, he selected a token that gave 5th place shootout finishing Steve Powell $100 cash on the spot.

Jiffy Lube Mini Stockers came to the stripe with Gil Brooks and Marilyn Junkin on the front row. Their 10 lapper went by in the blink of an eye, with another of the night’s feature winners – the #14 of James Townsend – first across the line. Like McHattie, he selected an envelope that doubled the point-fund money at the banquet. In the pill draw, he selected 3rd place that meant a quick $75 payment for Brooks, who had followed the lead duo of Townsend and Kris Khan across the line in the 10-lap segment.

Racked in reverse order from their 2017-point finish, Jordan Dallin and Stephen Bierworth were on the front row for the Trent Lakes Complete Plumbing Renegade Truck shootout. Jordan Dallin took the checkered flag for the Truck division, choosing the envelope that gave him $150. From the chip draw, he picked the second-place finisher. Ironically, this meant $75 in the pocket of his brother Jack.

Mitch Cook and Joshua Munro paced the Battlefield Equipment Rental 4Fun pack from the staging area for their 10-lap dash. Jeremy Kelly – who clinched his second consecutive track championship with a runner-up finish in the night’s feature event – took the win and picked an envelope that gave him $100. The random chance draw gave Rob Crick – who’d picked-up his first career ‘A’ main win August 26th – a $75 payout.

The final 10 lap shootout had Brandon Feeney and Paul Boundy bring the Thunder Cars to the green flag. Dan Archibald – who had finished 8th in the final 2017 standings – quickly got around the lead duo and took the win. In the envelope draw, the driver of the #07 machine picked-up an extra $200 and with his chip selection of 8, gave $100 to Jessica Pasinetti.

Bullring bullet points: The Top 10 Shootout was the subject of a great deal of social media chatter in the days leading-up to the Championship Clash. And even though it had been on the Peterborough Speedway schedule since May, the exact format and procedure weren’t finalized until a couple of days before the event. Drivers and fans were very pleased with the unique twist and it will likely return in 2018…The only issue during the Shootout Round came when Bryan Mercer hit the backstretch wall. The driver of the #81 machine – who finished 2nd in the Late Model point standings – was able to get back to the pits under his own power, but was finished for the night.