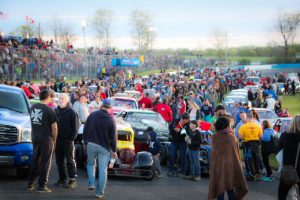 Combine 6 different classes of action with free spectator grandstand admission at the Country 105 Season Opener and blend thoroughly for the perfect kick-off to a brand-new schedule at Canada’s Toughest 3rd of a Mile Paved Oval. Peterborough Speedway unwrapped its much-anticipated 2017 calendar – Saturday, May 20th – with an outstanding night of short track stock car racing.

The first of the show’s main events was a 20 lapper for the Jiffy Lube Mini Stocks, with Noel Snow and Kris Khan on the front row. Kevin Strutt jumped out to an early lead with a daring 3-wide pass, but he’d surrender the spot to Khan with 4 laps on the board. Noel Snow took the position away a lap later. A yellow flag a lap later slowed the pace and when the green flag waved again, the leaders were working around slower cars using the outside line. Khan would hold-off a late race charge from Neil Hannah for the win, with Donovan Price, Snow and Ember Junkin rounding-out the top 5.

With Jack Dallin and Tim Burke showing the way, the Trent Lakes Complete Plumbing Renegade Trucks set-off for their 15-lap feature tilt. Burke took the lead from the drop of the green flag and pushed his #99 machine to the limit throughout the race distance, making the most of his return to regular action. Dallin took 2nd spot, with Stacy Bierworth, Bill O’Hara and Stephen Bierworth completing the fast 5.

Keith Parkes and Shawn Solomon paced a potent pack of Battlefield Equipment Rental 4Fun runners to the year’s first green flag. With only 5 circuits complete, the leaders had caught the tail-end of the field with Parkes showing the quick way around until a lap 9 caution flag slowed the pace. Defending track champion Jeremy Kelly took the lead on the restart, but gave up the spot as the field crossed the stripe on lap 15. Last year’s points runner-up Sean Kennedy made a lap 17 pass for the lead to take the win. Kelly, Ryan Oosterholt, Solomon and Dave Feeney followed Kennedy across the line.

Steve Mayhew and Jessica Pasinetti brought the Thunder Car field to the Great Canadian RV green flag, with James Townsend taking the lead with 5 laps on the scoreboard. As the entire pack battled for position, former track champion Anthony DiBello took control with 9 complete and moved out to a 5 car-length advantage. A late race yellow slowed the pace and allowed for a thrilling finish, as DiBello claimed the opening night win despite a strong challenge from Bailey Jacobs. Dan Archibald, Townsend and Rob Richards completed the top 5.

Shawn Stones and James Horner led the way as the Organics & Glass Late Model squad left the staging area for its 30-lap headline dance. An early yellow with just 3 laps complete slowed the charge and just a short while later, Tyler Betts moved to the front of the field. The popular second generation runner would hold the spot through the remaining race distance, including a late yellow and celebrated his first 2017 win with family, friends and fans in Dart Heating & Air Conditioning Victory Lane. Chris Mitchell, Horner, Bryan Mercer and Steve Powell occupied the next 4 spots.

Close to 25 teams came to the line for the inaugural Eastern Ontario Legends Series start, with Matt Haufe and Cole McFadden on the front row. A lap 7 yellow flag scattered the field, but Haufe remained in control of the field. Even a multi-car crash with just over a handful of laps remaining wouldn’t deny the former Legends champion his first win of the season. Cole Ledson, McFadden, Adam Cuthbertson and Jamie Riberdy were next to cross the line.

Bullring bullet points: With Peterborough Speedway’s 5 weekly divisions and the Eastern Ontario Legends Series on hand, there were close to 100 teams signed into the pits…Richard Dalglenis of Oxford Mills, Ontario left the first show of the year with a payday of nearly $1300 in the 50/50 draw.