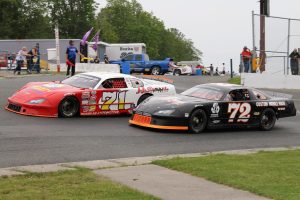 The 2017 season at Peterborough Speedway has thrilled fans since the first spectator walked through the main gate on opening night and took their seat in the grandstand. A casual glance at the point standings in the track’s 5 home track divisions will show how competitive this year’s racing has been at the venue known as Canada’s Toughest 3rd of a Mile Paved Oval. Next on the schedule is action with the Battlefield Equipment Rental 4Fun, Jiffy Lube Mini Stock, Thunder Car and Organics & Glass Late Model classes; along with the Trailers Plus Eastern Ontario Legends Saturday, July 29th.

Unofficially, the top 5 runners in the 4Fun field are about 60 points apart, while a handful of Mini Stock drivers are within 49 markers of the lead. From 1st to 5th place in the Thunder Car field, there is approximately a 66-point difference, while close to 80 points separates the same number of teams in the Late Model standings. The biggest gap is in the Renegade Trucks, where nearly 85 points makes the difference between 1st and 5th. Track owner and promoter says its exciting for the fans to see such close competition.

“In every one of our divisions, anyone can win a main event on any given night,” Josiasse said. “All it takes is some good racing luck and being in the right place at the right time. Its hard to believe that there is just over a month left in the regular season before we award the titles at the Championship Clash Saturday, September 1st.”

For the Saturday, July 29th program, pit gates will open at 3:00 and the general admission grandstands will be unlocked at 5:00. The night’s first Great Canadian RV green flag will wave at 6:00.

Looking ahead at the schedule finds the only regular season appearance for the OSCAAR Super Late Models and Modifieds, who’ll be part of the Touring Chase for the Colours event Saturday, August 5th. Action that night will also include the OSCAAR Midgets and Pro Midgets, with the home track Battlefield Equipment Rental 4Fun and Jiffy Lube Mini Stock divisions. There will also be a pre-race corn roast to kick-off the night.

Full details and the latest news about the 50th Anniversary Season at the tight, tricky bullring on Mount Pleasant Road, west of the Liftlock City can always be found by logging onto www.peterboroughspeedway.com, liking the Peterborough Speedway Facebook page or following the track on Twitter. Fans can also download the free app on their Smartphone.