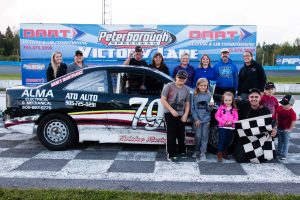 Feature race action kicked-off with 20 laps for the Battlefield Equipment Rental 4Fun teams, as Chris Tubman and Keith Parkes brought the field of 21 starters to the line. Tubman and former track champion Ryan Oosterholt battled side-by-side for the lead for a number of laps, before the pace was slowed for an incident in the 4th turn with 4 laps showing on the scoreboard. Oosterholt took control of the field in the restart and began working his way around some slower traffic near the halfway point. With some excellent battles throughout the field, Oosterholt took the checkered flag over Griffin Powell, Jeremy Kelly, Tubman and Jake Kelly.

With Tim Shanahan and Mike Johnson on the front row, the Ontario Pro Challenge Series hit the track for 30 laps of ‘A’ main excitement. Johnson 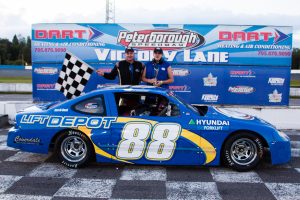 grabbed the top spot on the break, with Bryan Stevanus moving into second. There was a 4-car battle for the lead, before Stevanus took the spot on lap 7, but surrendered the position to Kyle Batty a couple of circuits later. An incident in the 2nd turn with 10 laps complete slowed the pace, but with the field back under green, Tim Norris was a man with a mission. After restarting at the back of the pack, he took the runner-up spot on lap 16 and took a lead he’d never surrender on lap 25. Kyle Batty, Peter Hattin, Tim Batty and Stevanus rounded-out the top 5. More information can be found at www.prochallengeracing.com. 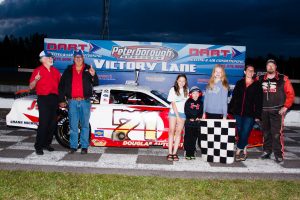 Dan McHattie would move into the top spot with 5 laps complete, with Mercer grabbing the runner-up spot as the lap counter marked 15 down. The lead duo began working through the backmarkers a lap later, as McHattie showed his strength with another main event win. Betts, James Horner and Steve Powell chased the leaders across the line in the caution-free feature.

With 20 laps of action on the table, Andy McCann and Brad Lavalle occupied the front row for the Jiffy Lube Mini Stock main event. Almonte, 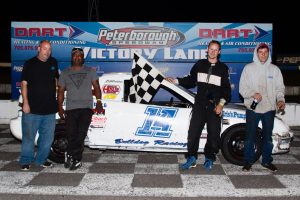 Ontario’s Nolan Gould moved into the lead with a trio of laps on the board, before Kevin Strutt marched around the front-runners on the outside line to take the top spot 3 laps later. The leaders caught the tail-end of the field with 11 laps complete, before a caution flag slowed everyone’s charge just 4 laps later. Noel Snow took the lead on the restart and added another win to his resume. Neil Hannah, Gould, McCann and Lavalle completed the top 5. 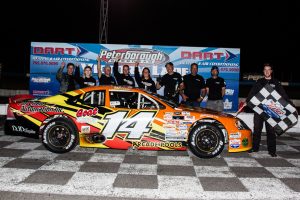 Brandt Graham and Kevin Gallant brought the Lucas Oil Sportsman Cup Series teams to the line for their 100-lap main event. Graham jumped-out to an early lead and had about an 8-car length advantage when the night’s first yellow flag waved with 16 laps complete. On the restart, the reigning series champion again took control, but young upstart Connor James was marching toward the front. He moved into 3rd spot on the 26th lap and set-off in pursuit of Graham from 2nd place 3 laps later. Graham was close to lapping 3rd place running Chad McGlynn when another caution slowed the field. There was no denying Brandt Graham his second win of the year, as the youngster went wire-to-wire for the victory. Connor James had the leader in his sights at the checkered flag, with McGlynn, Alvin McNicol and Doug Cathcart finishing the fast 5. Brent Wheller, Gallant, Bob Merrifield, Brandon Huras, Bob Schulteiss and Adam Martin completed the running order. Follow the series at www.lucasoilsportsmancup.com.

Bullring bullet points: Jason Whyte of Port Hope, Ontario took home the winner’s share of $445.50 in the 50/50 draw, in support of the Millbrook Legion…Reigning Lucas Oil Sportsman Cup Series champion Brandt Graham set a new track record in qualifying, with a lap of 14.50, eclipsing the mark of 14.60 set by Josh Wood in August of 2015…It was a rough night for Jack Horner. During pre-race practice, a car just in front of him had a coolant line come off and the #31 Late Model machine slipped in the fluid left behind and hit the first turn wall. He ran a pair of laps in the feature event, before retiring to the pits…Kenny Ohno was the winner in King of the Hill timed laps.