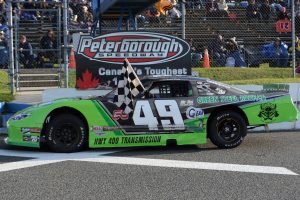 A little cleansing from Mother Nature may have gotten in the way of the intended schedule, but sunshine was the order of the day as the 2nd day of the 2019 edition of the Autumn Colours Classic – presented by Lucas Oil Products and Pure Country 105 – took the green flag Saturday, October 12th at Peterborough Speedway.

Things got rolling with reigning series champion Daniel Hawn taking a pair of checkered flags in an OSCAAR Pro Sprint qualifying heat, while Jessica James did the same in the Outlaw Midget preliminary rounds. Dave Bradley and Jody Bound had the other wins. Frank Davey and Dan Archibald each picked-up a KOD Disposal Super Stock heat, with Chad Strawn and defending series champion Cory Horner splitting the last round of OSCAAR Modified qualifying.

Owen Elliott and Gary Triska brought the OSCAAR Pro Sprint feature from the staging area for 25 laps of excitement. Elliott took the initial lead, with the field battling 3 and 4 wide for position behind him. Reigning series champion Daniel Hawn – who clinched this year’s championship by taking the green flag – moved into the runner-up spot near the end of the first lap and had the pack under his control with only a trio of circuits complete and held-on for the checkered flag. James Stanley and Rob McCall completed the top 3 positions. Follow the OSCAAR Pro Sprint tour at www.oscaar.ca.

Wally Wilson and Larry Lawson brought the 18 car field to the Great Canadian RV green flag to kick-off the 25 lap Outlaw Midget feature event. A yellow flag shortly after the initial start brought the track’s safety and clean-up crews to the racing surface to check on the involved drivers. Back under racing conditions, Robin McLean took over the top spot and although he’d relinquish the position for a couple of laps, he managed to be in charge of the field when the checkered flag waved. Richard Woodland, Adam Carruthers, Mike Bradley and Josh Inglis rounded-out the top 5 finishers. For more information on the Outlaw Midget Racing Club, visit www.outlawmidgets.ca.

Bullring bullet points: Dunrobin, Ontario’s Dave Riopelle – a racer with the Ontario Legends Series – won almost $804 in the day’s 50/50 draw, in support of the Millbrook Legion…After suffering a shoulder injury, defending Autumn Colours champion Kelly Balson relinquished the driving duties in his #10 Modified to JR Fitzpatrick…After some coaxing from his friend Craig Scott, former Peterborough Speedway Super Stock title holder Donny Beatty returned to action in the OSCAAR Hot Rod Series. After a spirited battle with Ed Bowlby, he wheeled his #40 machine to a win in the 6th and final qualifying race…His crew worked through the night after the #35 machine blew a head gasket during Friday’s practice, but Andy Kamrath – a former Mini Stock Autumn Colours winner – suffered further mechanical gremlins in Saturday’s 5th heat race. With the help of some of the local teams, the Innisfil, Ontario had a new power plant in the car and turned a few laps after the Saturday night program had finished…JR Fitzpatrick set the fast time in Late Model qualifying for the Electric City 167.

The 27th edition of Peterborough Speedway’s Autumn Colours Classic – presented by Lucas Oil Products and Pure Country 105 – concludes Sunday, October 13th with an afternoon of feature events. First out of the staging area will be the Late Model Electric City 167, with the green flag slated for 12:30.

For the complete schedule of events, look to www.peterboroughspeedway.com or check the track’s Facebook and Twitter social media platforms. There is also a free app available for smartphone users.