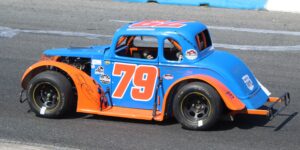 Fans of action with the Trailers Plus Canadian Legend Car Series have become familiar with the exciting brand of racing the tour brings to every event on the schedule and last year’s line-up was no exception to the rule.

During the 2022 season, 41 different drivers scored points during the tour’s shows at Sunset, Sauble, Flamboro and Peterborough Speedways. Overall accolades were handed-out during their championship celebration a few weeks ago but the true highlight of the annual performance is shown in how teams compared in the INEX championship standings that show regional results from different areas of North America.

Based on the strength of his 8 main event wins and 11 top-5 finishes, Parker Traves clinched the most recent Canadian Legend Car Series point title. The driver of the 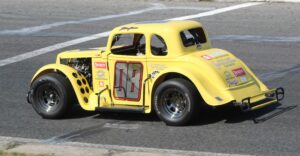 “Solid car counts and great racing were our friends across the board throughout the 2022 season,” explained Kevin Foisy. “It was a great year and to have so many of our drivers acknowledged for their performance is a major feather in the cap for our teams. It’s the kind of result everyone hopes for and gives us a strong footing as the tour heads into the 2023 line-up.” 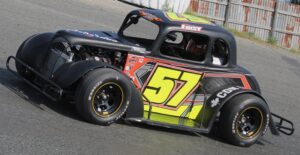 Foisy says that while series officials expect to release the new itinerary early in the new year, a few teams including himself, Josh Inglis and Steve Gareau will take a racing vacation and head to the running of the Winter Nationals – February 12th to 17th – at Citrus County Speedway in Inverness, Florida. Last season’s champion Parker Traves, Nick Portt and Foisy will head to Music City USA – Nashville, Tennessee – for a week of racing in the 2023 Nashville Spring Series. April 11th to 13th at Highland Rim Speedway. April 14th and 15th at Nashville Fairgrounds Speedway.

For details on the 2023 Canadian Legend Car Series schedule or to obtain parts, service, set-up chassis and engine repair as well as technical support, head to www.facebook.com/canadianlegendcars,  www.cdnlegendcars.ca or message canadianlegendcars@gmail.com.