Even with the 2nd day of action at the season-ending spectacular falling victim to heavy rains, the 2021 edition of Peterborough Speedway’s Autumn Colours Classic made headlines with fans, drivers and race teams. Feature race action took the spotlight Sunday, October 10th with the KOD Disposal Super Stocks first to step up to the line. 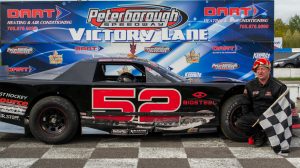 Rick Spencer-Walt and Mark Gordon led the pack to the green flag for the 50 lap affair. It didn’t take long for things to get exciting, as the front row starters were joined by Shawn Chenoweth in a 3-wide battle for the lead. Chenoweth moved into the runner-up spot following a lap-2 yellow flag and brought defending race champion Frank Davey into the mix. The frontrunners caught the tail-end of the field with 7 laps on the board, as Davey found his way into 2nd. A string of yellow flags brought the pack back together and welcomed Cory McAllister into the fray. Even with everything else going on, Gordon was able to hold onto the lead and became the latest Super Stock winner to wear the ‘crown.’ Davey was 2nd and Brandon McFerran bounced-back from early race problems to finish 3rd. McAllister and Paul Pepper rounded-out the top 5.

Battlefield Equipment Rental Bone Stockers were next-up for a 40 lapper that saw Steve “5-0” Finnegan take the lead after a side-by-side battle with Brad Lavalle. The pack was showing the capacity crowd some impressive action as the leaders worked through the backmarkers with about 10 laps on the scoreboard. Finnegan survived a pair of yellow flags within the last 10 laps and was the first car across the line. His No. 26 machine was disqualified after post-race inspection discovered issues with the car’s exhaust. That gave Phil Givens the win, over Craig Cole, Connor Ellis, Calvin Reesor and Brandon Feeney. 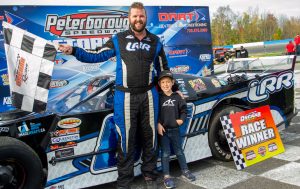 Another 50 lap feature – this time for the OSCAAR Modifieds – hit the track with Wally Wilson and Josh Reinhart on the front row. With only 2 laps complete, Andy Kamrath took over the top spot, with A.J. Emms and Reinhart hot on his tail. Even with Kamrath at the front of the field, all eyes were on the No. 77 and its relief driver, J.R. Fitzpatrick. Coming from the rear of the field because of the driver change, the hot rod had rocketed into the 6th spot early in the going and was sitting 3rd with 21 laps on the scoreboard. As potent as Fitzpatrick had been in his role subbing for Chad Strawn, he couldn’t steal the win away from Andy Kamrath. Emms finished 3rd, with T.J. Edwards and Reinhart completing the top 5.

the Great Canadian RV green flag for their Autumn Colours Classic headline dance. Haufe and his Canadian Legend Cars teammates Parker Traves and Langille were locked in a 3-car breakaway and started to catch slower traffic with just 8 laps complete. The first yellow flag of the race waved for an issue in the 2nd turn with just over 10 laps in the book. Traves took the lead on the restart, but Haufe was able to grab it back at lap 20. Langille – who saw Peterborough Speedway for the first time just a day earlier – moved into the runner-up position and stayed there for the rest of the race distance. Nicholas Ledson, who had come from the 15th starting spot finished 3rd with Traves and Hudson Nagy rounding-out the fast 5. 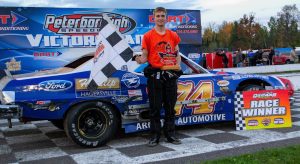 With Jaeger McMaster and Trevor Thompson on the front row, it was time for the OSCAAR Hot Rod teams to take centre stage. McMaster was showing his strength and started to lead the charge through the backmarkers with 10 laps complete before a debris caution brought the field back together. McMaster held back a hard charging Tyler Hawn for the win. Steve Book, Herb Walters, in his brother’s No. 47w and Thompson completed the top 5 finishers. With his 3rd place finish, Steve Book unofficially clinched the 2021 OSCAAR Hot Rod season championship.

James Horner brought the field of close to 20 starters from the staging area for the weekend’s marquee event. After 3 false starts, 2021 track champion and former Autumn Colours winner Dan McHattie took the lead and despite being chased by J.R. Fitzpatrick, Ryan Kimball and Chenoweth, set a strong pace. McHattie survived a flurry of yellow flags to lead every lap of the first half. Following the timed competition caution, McHattie set off again but it was a brand new race, with Norwood, Ontario’s closing on the No. 71 car and taking the lead with 96 laps complete. There was plenty of action throughout the pack, as Fitzpatrick made a move to wrestle the 2nd spot away from McHattie. He also took the lead from Kimball at the 150 lap mark, but the driver of the No. 29 grabbed the spot back 10 laps later. Connor James and Danny Benedict made things interesting with some late race maneuvers but Kimball wasn’t to be denied. Chenoweth and Fitzpatrick completed the top 5. 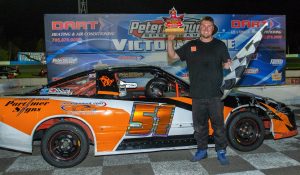 Karl Sault and Jassen Whyte were on the front row for the 67 lap Jiffy Lube Mini Stock feature, in memory of Melissa Bullen. The field of 28 starters caught the tail-end of the pack with just a handful of laps complete. Things came to a halt in a hurry when a multi-car wreck on the backstretch brought out the red flag. None of the drivers involved was injured, but their cars were unable to continue. Eric Yorke was having a strong run and took control of the field as the lap counter clicked-off 17 complete. Not even a final yellow flag at the 36 lap mark could keep the potent No. 51 machine from victory lane. Sault, Josh Bullen, at the controls of a No. 67 ride in tribute to his sister, Charlie Smith and Chandler Bos chased the race winner across the line.

In a 25 lap combined ‘A’ main featuring the Outlaw Midgets and Ontario Sprints, Jessica James and James Stanley were the top finishers of their respective divisions.

2021 Autumn Colours Classic notebook: Cavan, Ontario’s Dan Demers – who has been a long-time Central Ontario motorsports fixture – pointed out that he made a start in the 67 lap Mini Stock feature, driving car No. 67 at 67 years of age. He was 13th at the checkered flag…The father and son duo of Bill and Nick Clarke were part of the OSCAAR Hot Rod division starting line-up. During the 40 lap feature event, the pair was involved in an accidental, on track ‘family reunion’ that raised the ire of the older of the 2…Saturday’s rainout threw a curveball into Bryan Mercer’s weekend plans. With his son Jake racing with the Toronto Kart Club at Brechin Motorsports Park, the Port Hope, Ontario racer had former track champion Dave Morgan qualify his No. 81 car. He made it to the track in time for the race but started at the rear because of the driver change…A mock victory lane photo shoot was the Sunday morning setting as Mini Stock racer Kyle Neumeister proposed to his girlfriend. She accepted…In his first career Autumn Colours Classic Late Model start, Brandt Graham finished 6th and was the top running Limited Late.

Track management, staff and officials thank race teams and drivers for their support during the 2021 season. Keep checking www.peterboroughspeedway.com and the Facebook, Twitter or Instagram social media platforms for updates on the 2022 schedule at Canada’s Toughest 3rd Mile Oval.