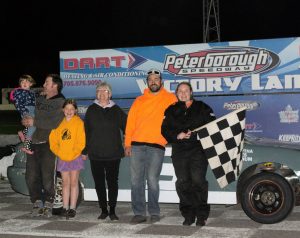 Feature race rolled to the line with a 20 lap Jiffy Lube Mini Stock dance that saw Victor Vowles and Ember Junkin on the front row. Junkin grabbed an early lead, with former track champion James Townsend moving into the runner-up spot. The field started to put backmarkers a lap down with 7 circuits on the scoreboard, as Nolan Gould and Kent Missons moved into contention. The event’s only yellow flag waived with 17 complete and created a 3 lap shootout. Junkin held-on for her first career feature win and celebrated with her mother and brother in victory lane. Gould, Missons, defending champion Ryan Oosterholt and Neil Hannah completed the top 5. 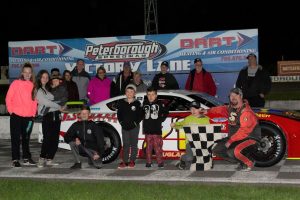 Brandon Feeney and reigning track champion Dan McHattie brought the Late Model pack to the stripe for their main event. Issues during the night’s second qualifying heat meant Steve Powell and Mark Gordon couldn’t answer the call and with a few others still making final adjustments to their equipment, only 5 starters took the green flag. McHattie grabbed the lead from his outside front row starting spot and claimed the season opening win. Tim Batty, Kyle Batty, Feeney and Doug Wills rounded-out the fast 5. 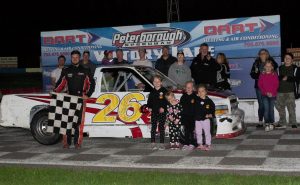 Nicholas Ledson, who’ll share the #26 ride with Brad Lavalle and Bill O’Hara paced the Trent Lakes Complete Plumbing Renegade Truck pack to the Great Canadian RV green flag. From the opening lap, last year’s title clinching ride was the class of the field and built-up and advantage of nearly half a track on the way to the win. O’Hara, Stacy Switzer, Terri-Anne Whittern and Jeff Dolley chased Ledson across the line.

With 20 laps on the agenda and 26 cars in the starting field, the Battlefield Equipment Rental Bone Stock feature was all about the numbers. Ryan Oosterholt and Rob Crick were on the front row, but Kris Khan moved-up from his 5th place starting spot and took the lead with 9 laps complete. With the leaders working their way through slower traffic. Khan took the season opening win, with Oosterholt, Sean Kennedy, Chris Tubman and Corey Strawn rounding-out the top 5. 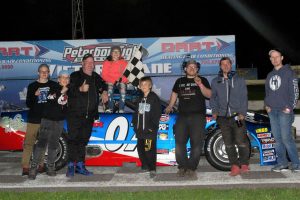 on Mount Pleasant Road for their first feature of the year. The pace was slowed for a front stretch incident with 3 laps on the scoreboard. Hard charger Dan Archibald took the lead on the restart and Burke slowed on the track, before dropping to the infield on lap 12. Another yellow – this time for a turn 2 issue on lap 17 – slowed the pace. Invader Coltin Everingham took over the runner-up spot on the restart, but it was Archibald’s #07 taking the win. Everingham, Gordon, Paul Boundy and Howie Crowe followed him to the checkered flag. 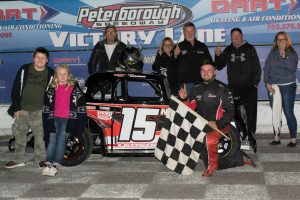 2019’s first night of action wrapped-up with a 25 lapper for the Trailers Plus Ontario Legends Series, that saw Mark Griffin and Andre Fiorini on the front row. Fiorini took the lead early, but the yellow flag waved before a pair of laps had been scored. Miles Tyson and Nicholas Ledson battled for the lead on the restart as the rest of the field managed to dodge Kevin Foisy, who failed to come up to speed. Ledson – who has already enjoyed some strong runs south of the border this season – took the lead with 7 complete and never looked back. Tyson grabbed the runner-up position, with Fiorini taking 3rd. Parker Traves and Adam Cuthbertson – another former series champion – were 4th and 5th respectively.

Bullring bullet points: Clarence Riley of Peterborough didn’t pay anything for his grandstand admission ticket and left the night of racing with more than $1600.00 in his pocket from the 50/50 draw…Peterborough’s Jeffrey Remington made a long-awaited return to action, wheeling a sharp yellow and black #47 Camaro in the Super Stock field…The Lavalle family had 3 cars in action on the night. Brad and Christen Lavalle wheeled the #6 and #06 Bone Stocks, respectively while John Lavalle was at the controls of the #06 Super Stock…Donovan Price had his tough racing luck continue. Hard contact with the front stretch wall knocked his #96 Mustang out of the Super Stock feature. Although was sore the next day, his safety equipment prevented any serious injury.

Action returns to Canada’s Toughest 3rd of a Mile Paved Oval Saturday, May 25th with a 50 lap ‘A’ main for the Jiffy Lube Mini Stocks the featured attraction. Also on the agenda will be the home track Battlefield Equipment Rental Bone Stocks and KOD Disposal Super Stocks, along with the Ontario Modifieds Racing Series, Ontario Pro Challenge and OSCAAR Pro Sprints. The intermission feature will offer fans the chance to run timed laps of the speedway for King of the Hill. Pit gates open at 1:30, with grandstands unlocked at 4:00 and racing at 5:00.

Look to www.peterboroughspeedway.com, or the track’s Facebook and Twitter social media platforms for the latest news and information. There is also a free smartphone app that allows you take Peterborough Speedway everywhere throughout the 2019 season.