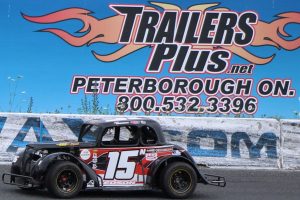 Things are about to wrap-up for the 2019 Trailers Plus Ontario Legends Series schedule, as teams head to the tight, tricky bullring on Mount Pleasant Road – October 11th to 13th – for the 27th running of the Autumn Colours Classic. There’ll be action and excitement with every turn of the wheel, as the popular travelling group closes-out another successful season. Tour spokesperson Jeff Drimmie says the OLS drivers are as excited about running the season-ending event as they were at the opening date on the calendar.

“Its been a great year and every driver who has strapped into one of our cars has something to be proud of,” said Jeff Drimmie. “We’ve had close to 45 different teams score points in at least one event this season and 35 of those showed-up a few weeks ago at Sunset. That gives our fan base a quality product every time the see an Ontario Legends Series event.”

Heading into the Autumn Colours Classic – presented by Lucas Oil Products and Pure Country 105 – Nicholas Ledson holds a 176 point advantage over Parker Traves and would clinch the 2019 championship by simply taking the green flag Sunday afternoon…except he won’t be there. Under Ontario Legends Series rules, drivers can drop a finish and after a stellar local season Ledson will take 0 points for Autumn Colours and skip Peterborough Speedway’s fall finale to compete at the U.S. Asphalt Nationals at Carteret County Speedway in Sawnsboro, North Carolina.

“That’s a decision that could keep the statisticians sharpening their pencils and working late into the night to calculate the final point standings,” according to Drimmie. “There are some tight battles all through the top 10 in the overall points and quite a few positions could be changing hands before everything finally gets decided.”

Even though they’re a bit further down in the current standings, Glenn Morris, Rob MacDonnell and Zac Latimer – the 3 drivers in the hunt for the 2019 Rookie of the Year honour – are just 24 markers apart, with 654, 637 and 630 points respectively.