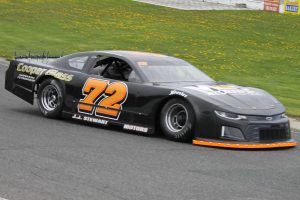 Most local racers begin their career in an entry level division, then advance through the ranks as their confidence builds and their skills develop. Steve Powell chose a different path, starting his vocation in the headline Late Model ranks at Peterborough Speedway. From an inexperienced rookie back in 2016, Powell has gained poise and self-assurance to the point of becoming one of the Central Ontario raceway’s drivers to watch just 3 years later.

The 43-year-old Millbrook, Ontario native has surrounded himself with some of the best known names the area has available to assist with his racing development. Combined with the seat-of-the-pants knowledge he was able to acquire on a week-to-week basis, Powell was able to bring his #72 machine home with a 3rd place finish in the final 2018 point standings. Even with that level of success, the driver says he’ll never stop learning and trying to make things better.

“I’ve been very lucky to have some good friends like Dave and Derek Lynch working with me throughout my career. They’re great when it comes to set-up ideas and suggesting changes we can make. They’ve likely forgotten more than most people will ever know about Peterborough Speedway,” Steve Powell said. “We have a very competitive field in the Late Model division, but its also a closely knit group. For the most part, everyone seems to get along and is always willing to help someone out.”

At the Saturday, May 18th season opener, Powell showed-up with a fresh, new look to his equipment. During practice, he put the piece through its paces, turning some solid laps around the tight, tricky bullring on Mount Pleasant Road, looking for the comfort level that would lead to a solid start to the 2019 schedule. The team’s hard work obviously paid-off, as the driver scored the first checkered flag of his career during the night’s opening heat race. Even though things didn’t go exactly as planned – with the car loaded into the hauler before the feature event – Powell was still pleased with the way his season got rolling.

“Picking-up my first ever racing win with a new car on the opening night of the year was a real shot in the arm for our team,” Powell said. “The car felt great during the pre-race practice sessions and I had a good feeling of how the night could go. It’s a long season and we have some excellent notes to build on. I can’t wait to get back on the track to see if we can take care of some unfinished business.”

Steve Powell offers special thanks to his girlfriend Jamie-Lynn Hayes for her support and encouragement. In the shop and at the track, the car is prepared and maintained by Blain and Isaac Delyea and the driver’s father, Brad Powell. To keep up-to-date with the team’s progress during the year, head to www.peterboroughspeedway.com.