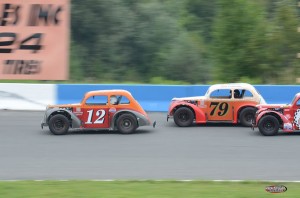 Mother nature sent cold wet weather all thru the month of April, but on Opening night, it was obvious that the old girl LOVES racing. The sun came out and the engines roared at Canada’s toughest and fastest 1/3rd mile oval in front of a great crowd of amazing fans.

In the Battlefield Equipment 4 Fun Division, the heats started to heat up with some familiar faces in victory lane, including Ember Junkin (19) posting the first Checked flag in the Junkin racing stable in Heat #4, and last years Champion #14 of Dustin Quesnel (14) in Heat #3.  Quesnel proved it was no fluke as he cruised in to victory lane to take the 1st Battlefield Equipment 4 Fun feature win.

Last Years Series runner up Mike Nelson in his #85 Peterborough Hyundai Mini Stock took both of his heat runs to victory, but it was the #41 of Tyler Junkin that parked that shiny “Cavilac” in victory lane to do two things, 1. to show up his sister by winning the Peterborough Hyundai Feature race, 2. To prove that his win last year at the 2010 Autumn Colours Classic, The Super Bowl of Canadian Short Track Racing was no mistake!

www.peterboroughspeedway.com Late Models had a battle between Tony “The Gun” Tiemersma winning both heats as well as the feature, making him a force to be reckoned with, but behind him the totally rebuilt cars of Darrin Kearnan (55) and Larry Crowe Jr (66) that showed that they too are in the hunt for a Peterborough Speedway championship this year.

Opening night also meant that the unmistakable action of the Legends was back at their home track, and they left no disappointments. Even during practice the story coming in to open night, was the new softer compound tires and how they would react on the fastest 1/3 mile oval in Canada. Bill Mason (4) kissed the back stretch wall as did others during open practice before the gates opened, and 2 time series champion (79) Adam Cuthberson came with a brand new car, giving his winning ride to his younger brother Wesley.  But Champions breed wins and Cuthberson was not going to leave without one, taking the Lucas Oil Legends feature win, and giving the trophy to a deserving fan.

All in all, an amazing start to a season that promises not to disappoint. Coming up this Saturday will be the first points race of the season, and it is going to be exciting.